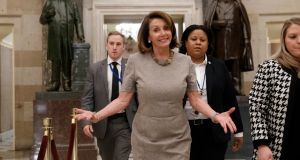 Since Donald Trump blinked first to end the US government shutdown on Friday, House Speaker Nancy Pelosi is being lauded as her party’s biggest asset, her first major victory over Trump having confirmed her as the most skilful adversary the president has faced since coming to power. Photograph: Shawn Thew/EPA

Earlier this month, as she fought to win her Democratic colleagues’ support to be elected Speaker of the House of Representatives, Nancy Pelosi was dismissed by her critics as a throwback who would struggle to appeal to a new generation of voters. Just a few weeks later, she is lauded as her party’s biggest asset, her first big victory over Donald Trump having confirmed her as the most skilful adversary the president has faced since coming to power.

The clash between Trump and Pelosi over the government shutdown saw an abject capitulation by the president on Friday, when he ended the 35-day standoff with none of the $5.7 billion he had demanded for his US-Mexico border wall. With his poll numbers falling, Republicans threatening to revolt and the Democrats showing no sign of blinking, Trump had no choice but to back down. The reopening of government is temporary, Trump maintains, but the month has been so calamitous for them that Republicans on Capitol Hill will have little appetite for a reprise.

Much of the credit for Trump’s defeat goes to Pelosi, the 78-year-old Democrat whose sure-footed handling of the crisis contrasted with the strategic ineptitude of the Trump White House. Pelosi’s election as House leader, her critics said, would be to Trump’s advantage; what better foil could he have than this quintessential west-coast liberal? In fact, as the shutdown showed, Trump must adjust not only to a House that will no longer bend to his will, but to an opponent who is smarter, shrewder and more experienced than he is. Pelosi even borrows from the president’s playbook. During the standoff, she described his demand for a wall as “like a manhood thing for him”, and publicly compared him to a toddler.

Voters will have forgotten about the shutdown by the time they vote for their next president in two years’ time. But by leaving Trump wounded and enhancing Pelosi’s standing as the unquestioned leader of her party, the events of the past month will set the tone for the remainder of Trump’s term. That will worry the White House and embolden the opposition.