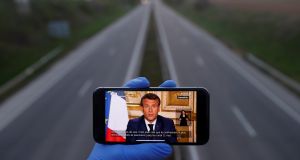 The French government hopes to make a tracing app an integral part of its exit strategy from lockdown, along with more widespread use of testing and surgical masks.

But development of the app, called StopCovid, has sparked a debate over the ethics of digital surveillance. The limits of the technology, and possible public rejection, also throw its use into question.

China, South Korea and Singapore have already used contact tracing apps to fight the spread of Covid-19. France is pursuing its national effort while at the same time participating in the German-led EU consortium Pepp-PT.

European governments are more reluctant than their Asian counterparts to use technology to determine a user’s location. French commentators interpret this as greater willingness in Asian societies to sacrifice individual freedoms for the collective good.

“No one will have access to a list of contaminated people, and it will be impossible to know who has contaminated whom”

Instead of a mobile’s GPS (global positioning system), the French app would rely solely on Bluetooth technology that enables a smartphone to record the numbers of nearby phones. When a person is diagnosed with Covid-19, their phone will transmit anonymised warnings to phones that have been in the same area.

Apple and Google are co-operating on technology to make iPhones and Android phones compatible for the Bluetooth app.

If France adopted StopCovid, President Emmanuel Macron said on April 13th, the app would be “on a voluntary and anonymous basis”. Data would be destroyed after the crisis.

Cédric O, the junior minister for digital technology, provided details in an interview with Le Monde. “No one will have access to a list of contaminated people, and it will be impossible to know who has contaminated whom,” he said.

“The idea is to warn people that they have been in contact with a patient who tested positive, so that one can get tested oneself, and seek treatment or self-isolate early,” O said.

French Covid-19 patients initially filled out questionnaires, and volunteers telephoned people they had been in contact with. That system was quickly overwhelmed by the scale of the epidemic. The tracing app would replace it.

O is not certain the app will work. Bluetooth does not measure the distance between telephones, so it risks sending false alerts to people who were at a safe remove. It also risks notifying people who were not in a given place at exactly the same time as the infected person. To be effective, the app must be limited to a defined time frame and perimeter.

The interior ministry developed a voluntary mobile app during the 2015-2016 jihadist attacks to alert citizens if an attack was taking place in their area. But alerts arrived hours after attacks were over and the measure was quietly abandoned.

Teams at the Élysée, the ministries for digital technology and health and the CNRS, Inria and Inserm research institutions are working on StopCovid. Six leading French tech companies have deployed 50 engineers to develop their own digital tracing app. They claim it will be ready this month.

The French National Assembly will debate adoption of StopCovid on April 28th, but will not hold a vote on the measure. There is already significant political opposition. “I must have missed something. Did we change regimes?” said Julien Bayou, the secretary general of the Europe Écologie – Les Verts party, referring to the absence of a vote on the app.

Opposition extends to Macron’s own La République en Marche party, whose deputy, Sacha Houlié, said the app would amount to “voluntary servitude” motivated by fear. “The collection of data for tracking must be condemned, even if it is consented to,” Houlié said.

Adoption of StopCovid would constitute “a risk of sliding towards a form of digital tyranny”, the psychoanalyst and philosopher Roland Gori told La Croix newspaper. “It’s very important that this technology not be used to hide the inability to provide large numbers of tests and surgical masks.”

The opposite opinion was expressed by Gérard Roucairol of the Académie des Technologies. “Tracing would constitute an exchange of data in which each has an interest. The government would better understand the epidemic, and we would benefit from its knowledge.”

And Jérôme Perrin of the National Consultative Committee on Ethics said: “Everything that helps us diminish the number of deaths pleads in favour of this kind of measure.”

A study by the University of Oxford, published in Science magazine, concluded that for a tracing app to be effective, it must be used by at least 60 per cent of the population. In a poll commissioned by the Oxford team at the end of March, 48 per cent of French people surveyed said they were certain to download the app, and 31 per cent said they probably would.

But a poll conducted two weeks later for the Jean-Jaurès Foundation found only 46 per cent of French respondents would be willing to download the app while 45 per cent said they would not.