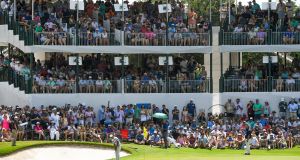 The PGA Tour is set to restart with the Charles Schwab Challenge at Colonial Country Club in Fort Worth, Texas. Photograph: Ben Jared/PGA Tour

The PGA Tour hopes to take delivery of up to one million Covid-19 test kits to assist with the completion of its season from June 11th.

President Trump’s desire to use sport as a key vehicle to accelerate a return to normality in the United States is emphasised by a plan to allow those involved in PGA Tour events into the country under the auspice of essential travel. The Tour remains confident of pushing forward with tournaments given the scale of government backing.

A revised schedule was announced last week, featuring 14 tournaments until September 7th. The first four, starting with the Charles Schwab Challenge in Fort Worth, Texas, will be closed to spectators. Estimates are that between 700 and 800 personnel will still be needed on site.

The rigorous testing procedures will involve players, caddies and officials being sent testing kits – already on mass order – to their homes, with a further and immediate check required if anyone has travelled to a tournament by aeroplane. Daily tests will subsequently be undertaken by each individual in tournament week, with anyone returning a positive result asked to self-quarantine for 14 days. The Tour events are likely to be very different to those in pre-coronavirus times, with locker rooms and player dining facilities unavailable.

The Ryder Cup remains in its original position of late September at Whistling Straits in Wisconsin. Talks regarding the viability of playing the biennial competition – with or without fans – are due to continue this week. The qualification processes for the USA and European teams will also be up for discussion.

Testing procedures were a key topic as Trump addressed the nation on Friday. The US president claimed the country had already carried out almost 3.8 million tests. It is unclear precisely what type of kits the Tour has on order – or what level can be delivered – but both Trump and golf administrators have cited the usefulness of saliva tests, as recently approved by the Food and Drug Administration but currently for emergency use. Testing machines have been considered but are more likely to be used when the general public are permitted entry to tournaments.

Jay Monahan, the PGA Tour’s commissioner, has stressed the importance of mass testing and that golf should know its place in terms of national priorities. “We need to have widespread, large-scale testing across our country, where we are going to be able to test players, caddies and other constituents before we return,” he said. “But we need to do so in a way that’s not going to take away from the critical need [the country is] going to be facing.”

The Tour estimates at least 25 of its member players and 35 caddies are currently outside the US. If border restrictions are not eased by mid-June, there is an understanding these individuals will still be granted entry if due at a golf tournament. What this means in respect of returns to their home bases is unclear.

Monahan joined a group of leading sports commissioners in discussion with Trump last week. A similar meeting took place in early April. The National Basketball Association, in stark contrast, remains circumspect about a return to competition. “We are not in a position to make any decisions,” said Adam Silver, its commissioner, on Friday. “And it’s unclear when we will be.”

The first major of the golf season, the US PGA Championship, is due to take place in a rescheduled slot from August 6th. There remains scepticism whether Harding Park in San Francisco will be able to stage the event. Valhalla in Kentucky and Hazeltine in Minnesota – host to the 2016 Ryder Cup – are among the back-up options.

The European Tour, which is also mindful of necessary testing protocols upon a possible August restart, is expected to issue schedule revisions in the coming days. – Guardian