UK police detain man over deaths of 25 cats in Brighton 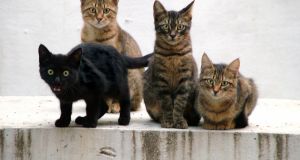 The arrest follows a Sussex Police investigation during the past 18 months into at least 25 cats who have been killed or seriously injured in Brighton.

A 52-year-old man has been arrested as part of an investigation into the deaths of 25 cats in Brighton.

The man was detained by police following the death of a cat that was found seriously injured near Trafalgar Street in the East Sussex city on Saturday.

The arrest follows a Sussex Police investigation during the past 18 months into at least 25 cats who have been killed or seriously injured in the city.

A force spokesman said: “Sussex Police have arrested a local man in connection with cat deaths in Brighton following a breakthrough in a longstanding investigation.

“Officers were made aware that a cat had been injured near Trafalgar Street, Brighton on Saturday evening. The cat had sustained serious wounds and has unfortunately since died.

“The investigation response quickly located and secured CCTV footage of the area.

“This was viewed and a local 52-year-old man was arrested on Sunday on suspicion of criminal damage and possession of an offensive weapon in a public place. He has been released on police bail until June 28.”

The investigation and arrest in Brighton comes after the Metropolitan Police closed an inquiry into more than 400 cat deaths across London and the home counties attributed to the so-called Croydon Cat Killer.

The Met said that there was no evidence of a crime and put the deaths down to vehicle collisions and attacks by wild animals. – PA