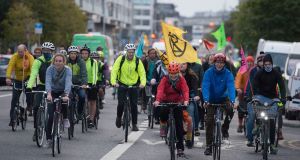 Cyclists have taken to the streets of Dublin in solidarity with Extinction Rebellion protests taking place in Merrion Square.

More than 100 of them slow-cycled through the streets at rush-hour, leaving a trail of motorists behind them.

They left from Grand Canal Dock and cycled in a loop over Butt Bridge and around past the Custom House, arriving in Merrion Square 45 minutes after they started.

Judging by the beeping of horns as they passed through they had more support from motorists than might have been expected.

The protest was led by the I BIKE Dublin campaign, a group of volunteers who campaign for better cycling facilities in Dublin.

They have an ambitious set of demands which would see the end to free and subsidised parking for civil servants and employees of semi-State agencies, zero-tolerance enforcement against driver abuse of cycle lanes, changes to traffic light sequencing to favour pedestrians and cyclists and an end to all new road-building schemes.

Their list of grievances was exacerbated by this week’s budget, which they state has done very little for cycling.

I BIKE Dublin spokesman Oisín O’Connor said they were “hugely disappointed” by a budget which did nothing to expand the Bike to Work scheme or to offer incentives to subsidise electric bikes.

He pointed out that the Government is giving economic incentives of up to €5,000 for electric cars, which add to congestion, and nothing for electric bikes. I BIKE Dublin is calling for a €500 grant for such bikes.

His views were shared by those who participated in the cycle. “It [the budget] gave crumbs to cycling in terms of the land transport budget. Electric vehicles are still out of the price range of most people,” said Ciarán Ferrie, an architect and cycling enthusiast.

“We want to see the greater Dublin area cycle network plan implemented, which will make Dublin a safe city for cycling.”

Climate change was not the only issue exercising the cyclists. Medical doctor Jeannette Golden said road pollution kills people. “If more people cycled, we would reduce pollution, but people are reluctant because the roads aren’t safe for cycling.”

Dr Golden said that she had heard women do not cycle because of harassment, “but I haven’t got it myself”.

Ronan Conroy, her husband, said the climate crisis is also a health crisis. “Everybody’s health is going to suffer from the effects of extreme weather. We need an across-the-board approach to the climate crisis.”

Daniel Dunne came with his twin daughters Abbie and Ellie (7) who live in Barrow Street, Dublin. His daughters cycle supervised to school in Sandymount every morning.

“The roads aren’t safe or fit for purpose at this stage. It’s not feasible for people to share a road with a bus. People’s safety have to be a priority,” he said.

Dog in the street

A colourful addition to the parade was Derek Murphy from Ringsend on his tricycle with his dog Dynamo. “I bring my little dog everywhere with this tricycle. I’m totally green. I’m an ultra-cyclist. I am here to support Extinction Rebellion,” he said.

Later on Thursday Extinction Rebellion protesters and protesters against the plantation of Sitka spruce trees in Leitrim congregated outside Dáil Éireann.

The latter group are seeking a complete remodelling of forestry in Ireland away from commercial Sitka plantations and towards native broadleaf species including oak, ash and alder.

They claim Sitka plantations represent a non-native monoculture that scars the landscape, supports almost no Irish wildlife and requires heavy pesticide and fertiliser use.

They sought to present the Minister for Agriculture Michael Creed with an Irish oak sapling at the Department of Agriculture, but he was not there.

Brian Smyth from Save Leitrim said some townlands in the county had 90 per cent landing of Sitka. Almost 20 per cent of the county is planted.

He said the plantations are having an impact on the economics of Leitrim, replacing agriculture with forestry and giving no economic benefits to the local community.