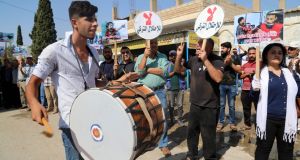 Kurdish people hold placards reading in Arabic ‘No to the Turkish occupation’ during a protest against the Turkish offensive, in Amuda town, Al-Hasakah governorate, northeastern Syria. Photograph: EPA

Arab states have uniformly condemned the Turkish invasion of northeast Syria and called for an immediate halt to the offensive.

Given a green light by US president Donald Trump, Turkey has deployed artillery, air strikes and cross-border troop raids against Kurdish militia positions, towns and villages along a 120km stretch of Syrian territory bordering Turkey.

Syria vowed to repel the invasion as a “blatant violation” of international law. Neighbouring Iraq’s president Barham Salih, a Kurd, deemed Turkey’s incursion “[a] grave escalation [that] will cause untold humanitarian suffering [and] empower terrorist groups”.

He said the world must unite to avert a catastrophe and promote the rights of all Syrians, including Kurds.

Although there is a long-standing rift between Syrian Kurds and the leaders of Iraq’s Kurdish region, the latter have called on Russia to protect Syria’s Kurds.

Saudi Arabia expressed concern “over this aggression”, which it considered “a threat to regional peace and security”. It stressed the need to ensure the safety of Syrian civilians and respect for Syria’s sovereignty and territorial integrity.

The Emirates said Turkey’s incursion “represents a dangerous development”. Bahrain called for an emergency meeting of the Arab League with the aim of adopting a “unified Arab position toward this aggression”. It urged the UN Security Council to assume its responsibilities with the aim of “finding a peaceful solution in Syria”.

Lebanon characterised the Turkish operation as an “occupation of Syrian territory which will subject its people to killing and internal and external displacement” and stressed the importance of respecting “Syria’s land and people”.

Beirut called on Ankara to “re-evaluate its decision” to launch the offensive.

Egypt condemned the operation “in the strongest words” and urged the security council to halt “any attempts to occupy Syrian territories or change the demographics in northern Syria”.

Arab League secretary-general Ahmed Aboul Gheit said Turkey’s invasion threatened to inflame other conflicts in eastern and northern Syria and “could allow for the revival” of the Islamic State terror group. League foreign ministers are set to meet on Saturday in Cairo, said Hossam Zaki, his deputy. He called the offensive “an unacceptable assault of an Arab member state” while it is embroiled in war.

It is significant that nearly all condemnation of Turkey’s assault on Syria has come from foreign ministries rather than rulers who hesitate to alienate Turkey which is seen as a troublemaker in the region. This is so because of its close connection to the Muslim Brotherhood, which is regarded as a threat by Egypt and the Gulf states.