Two-thirds of men drinking to cope with the lockdown, national survey reveals 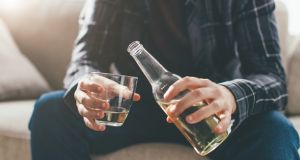 Two-thirds of men have been drinking to cope with the lockdown, new research reveals. Photograph: Getty Images

Two-thirds of men have been drinking to cope with the lockdown, new research reveals.

The study, which focused on the 30-day period prior to April 24th 2020 during the peak of the lockdown found that two-thirds of men reported drinking to cope for reasons including loneliness, anxiety and boredom.

Drinkaware is a national charity partially funded by the drinks industry. The survey was commissioned by Drinkaware and conducted online in April 2020 by Behaviour & Attitudes with 1,015 adults (18+) in Ireland.

The aim was to assess national attitudes, behaviours and motivational drivers regarding alcohol consumption during Covid-19 restrictions when the majority of people were confined to within just two kilometres of their home.

The findings, released at the start of Men’s Health Week, show a disproportionate increase in frequency and volume consumed among men in Ireland when compared with women and the overall population.

Men are more likely to report drinking to cope (66 per cent) than women (55 per cent).

Men are also more than twice as likely to report binge drinking four or more times in those 30 days (21 per cent), compared to 10 per cent of women and 15 percent national average.

“Irish men are clearly using alcohol as a way to cope with the anxiety, loneliness and boredom of Covid-19. Men already fared worse in terms of frequency and volume of drinking. Now they are exhibiting consistently hazardous and potentially harmful drinking habits.

“Men’s Health Week gives us the chance to put the focus on men’s wellbeing, and to support each other and renew our collective efforts to spark an open dialogue about men’s physical and mental wellbeing.”