UK lockdown: What are the new coronavirus restrictions?

The updated advice for Britons include shopping restrictions, exercise limits 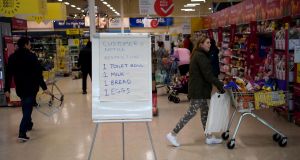 A board displays shopping restrictions at Tescos supermarket in the UK. Photoraph: Gareth Copley/Getty Images

What do the new restrictions involve?

In brief: an Italian-style lockdown to force people to stay at home beyond a small range of very limited circumstances. Under the terms explained by UK prime minister Boris Johnson in his TV address, people will only be allowed to leave home for the following reasons:

It will be banned to meet friends, or to shop for anything beyond essentials, or to gathering in crowds.

What enforcement action will there be?

Police will be able to enforce the rules, and impose fines for people who do not abide by them. Authorities will force the closure of all shops selling non-essential goods, as well as all libraries, outdoor gyms and playgrounds, and churches or other places of worship. All public gatherings of more than two people will be banned, apart from if people live together. Also prohibited are all social events such as weddings and baptisms, although funerals will be permitted to take place.

What is this meant to do?The hope is to severely limit the scale of physical and social interaction, and thus slow the spread of the coronavirus so the growth in cases does not overwhelm the NHS, and lead to mass deaths.

This remains to be seen – and given the time lag between infections and people becoming critically ill, it will be up to two weeks before any benefits are realised. On Monday, Italy recorded a slight reduction in the number of coronavirus deaths two weeks after it introduced a national lockdown. So the UK can expect an exponential growth in infections and deaths first, before – hopefully – the curve flattens.

What has been the situation up till now?There has been a gradual increase in restrictions, going from ministers urging people to work from home if possible and avoid pubs and other crowded places, to schools and nurseries being closed, and then on Friday the forced closure of pubs, clubs, restaurants, gyms and other communal businesses. However, the information on social distancing has thus far been couched in terms of advice, with Johnson stressing the desire of people to be out of doors.

What has been the background to the move?

Opposition parties and, increasingly, some Conservative MPs have been pushing for tougher restrictions on people’s movement, especially following much-shared photos over the weekend of crowds in national parks and elsewhere. Speaking in the Commons on Monday the former health secretary, Jeremy Hunt, said: “We must move to lockdown rules now that ban non-essential travel. It’s time not just to ask people to do social distancing but enforce social distancing rules.”

What’s happened in other countries?

Many other European countries have taken a lockdown approach, generally a week or so before the UK. Italy saw a ban on almost all movement in the north of the country extended, and then intensified, with only a selection of vital shops and businesses allowed to open, and police checking on people’s movements. Spain and France are among countries to take similar measures.

The most repressive approach was taken in China, with authorities essentially sealing off 11 million people in Wuhan, where the virus first began spreading, before extending the quarantine zone to take in more than 50 million people. People were kept in apartment blocks, with visitors and almost all outside movements banned, with other measures including compulsory temperature tests, and those feared to be ill put into isolation.

1 Tuberculosis vaccine ‘potential game-changer’ in Covid-19 fight
2 Coronavirus: Situation in Ireland ‘misrepresented’ because of limited testing
3 Remote control: Coronavirus is changing how Ireland is governed
4 Coronavirus Q&A: How to shop safely during Covid-19
5 We need to cancel the Leaving Cert and give students predicted grades
Real news has value SUBSCRIBE