Cabinet to discuss ban on commercial, social activity and on all non-essential travel 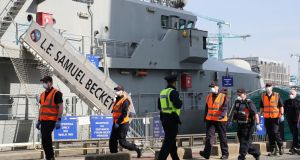 The LE Samuel Beckett on Sir John Rogersons Quay is being used as a coomunity sampling centre. Photograph: Nick Bradshaw

The Government is set to introduce further measures to prevent the spread of coronavirus on Tuesday, with a ban on all non-essential travel, commercial and social activity among the unprecedented options to be discussed by Ministers at the Cabinet’s weekly meeting.

Public health experts are meeting early on Tuesday morning to consider a range of possible actions and will advise the Cabinet of any new restrictions they believe are now necessary to slow the spread of the virus.

However, it is expected that significant new restrictions on travel, work and movement will be announced, which are likely to mirror recent moves made by several European countries and by the British government on Monday night.

Among the options under consideration by the National Public Health Emergency Team (NPHET), which will make the recommendations to Cabinet, are the closure of non-essential business premises, playgrounds where they have not been closed already, and stricter implementation of physical distancing in parks and on beaches. There is a reluctance in Government to close public spaces.

Some restrictions on public transport may also be considered, although sources pointed out that numbers using trains and buses had plummeted. The Government is also due to announce a multi-billion euro package to prop up incomes and boost emergency welfare payments as part of measures to tackle the deepening coronavirus crisis.

Two more patients died from Covid-19, the NPHET said on Monday evening, and a record number of 219 new cases were reported.

There are now a total of 1,125 confirmed cases of Covid-19 in the Republic, according to chief medical officer Dr Tony Holohan.

Meanwhile, “ten of thousands” of people are seeking to be tested each day, Dr Holohan revealed, and priority will be given to healthcare workers and the sickest patients.

Sources on Monday night said the cost of the Government’s package of supports would likely run into billions of euros. One element will be a substantial increase in the €203 welfare payment announced earlier this month for people who lost their job due to the Covid-19 emergency.

The second element is an income support scheme similar to that announced recently by the Danish and UK governments. The Irish scheme will take weeks to fully set up but the outline is set to be announced by the Government on Tuesday. The precise details were still being worked out on Monday night.

Businesses applying for State support will have to prove their income has dropped by 25 per cent and that they have liquidity difficulties.

The Government is also likely to order that holders of private health insurance will receive no special privileges for hospital admissions during the crisis.

Sources say the health service will operate essentially as a “one-tier” system, with admission to hospital decided solely on clinical need.

At present people who buy private health insurance – almost half the population – can often secure speedier access to many treatments, while hospitals rely on income from the health insurers which pay them hundreds of millions of euros a year.

However, Government sources say this system will be suspended while the health service deals with the Covid-19 outbreak.

The Government is close to concluding an agreement with private hospitals to bring their capacity effectively into the public system, adding 1,900 beds as well as 200 ventilators to help deal with the expected influx of patients in the coming weeks.

The two new Covid-19 deaths involved males in the east of the country, and brought the total number of deaths to six.

Dr Holohan said he was “very pleased” with the response of the public to the restrictive measures introduced 10 days ago, and said the aim was for “most of the people to comply with most of the measures most of the time”.

With the backlog of people waiting to be tested reaching 40,000 over the weekend, he said it was still the intention to “test as quickly and as broadly as possible”.

Dr Holohan said there may be a lot of “worried well” among the tens of thousands seeking tests but he expected demand to drop over time.

Asked whether any completed swabs had expired while waiting to be processed, Dr Holohan replied: “I can’t honestly say that hasn’t happened.”

A number of food and drink outlets, including McDonald’s, Supermac’s and Starbucks, announced they would close due to the pandemic. Bank of Ireland also announced the temporary closure of 101 outlets. Knock airport said it would cease operation from next Monday until further notice.

Men account for 55 per cent of cases, according to an analysis of cases reported up to last Saturday.

Community transmission now accounts for 45 per cent of cases, close contact with confirmed cases for 23 per cent and travel abroad for 31 per cent. Some 37 clusters have been reported, involving an average of five to six cases each.

RTÉ presenter Claire Byrne is among those to have been diagnosed with the virus, she revealed on Monday. Tánaiste Simon Coveney, who was interviewed by Ms Byrne two weeks ago, was tested and found to be negative.

The World Health Organisation warned the pandemic was accelerating. “It took 67 days from the first reported case to reach the first 100,000 cases; 11 days for the second 100,000; and just four days for the third 100,000,” WHO director general Dr Tedros said.