No rescheduled dates confirmed but organisers intend on finishing competition 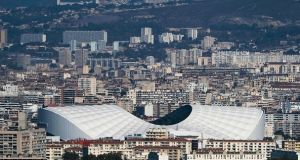 The 2020 Marseille finals were due to be played in May. Photograph: Getty Images

The organisers of the Heineken Champions Cup remain committed to the idea of rearranging their flagship final on another date in the Stade Vélodrome. This follows their decision to postpone both the semi-finals and final, which was to have been held in the home of Olympique de Marseille on Saturday, May 23rd.

European Professional Club Rugby (EPCR) have not raised the white flag on finishing this season’s Champions Cup and Challenge Cup, although the cross-border and knock-out element of the two competitions arguably make them the most vulnerable of the unfinished competitions, even if some kind of summer window becomes available to finish off the 2019-20 seasons in the northern hemisphere.

Following a conference call on Monday, the board of the EPCR said it is “abiding by the official directives and recommendations of the relevant authorities in its territories to restrict the Covid-19 pandemic”.

Around 50,000 tickets had been sold for the Champions Cup final and 25,000 for the Challenge Cup final, also to be played in the Stade Vélodrome on Friday, May 22nd, and pending any re-scheduling or cancellation of the two games, will reimburse ticket holders at that juncture.

The majority of those ticket sales would be in France, making a putative re-arrangement potentially more suitable for them. While there was an estimated 15-20,000 Leinster fans among the 51,900 capacity at last year’s final, and some of this year’s advance sales would have been in Ireland, provincial fans know that around 3,500 tickets are made available for the respective finalists. They also have means of acquiring tickets at short notice through exchanges on social media.

EPCR have been receiving criticism on social media for not abandoning their two competitions given the coronavirus epidemic makes it unlikely the season can be salvaged. But aside from wanting to retain the tournaments’ integrity in their 25th years, the organisers will be mindful that they raise close on €50 million for the three qualifying leagues. The also have to make every effort to finish the two competitions bearing in mind contractual obligations with the various television broadcasters and sponsors.

BT Sport in the UK and Ireland along with beIN Sports in France are the main TV broadcasters, while there are also terrestrial TV deals with Virgin Media, Channel 4 and France TV, as well as subsidiary worldwide rights to broadcasters further afield.