Speaking live on RTE from her home where she is in self-isolation, journalist and broadcaster Claire Byrne has described her experiences of Covid-19. Video: RTE / Claire Byrne Live 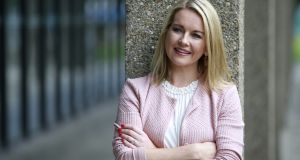 Absurdity mixed with slow-rising dread has become part of the fabric of daily life, and there is lots of both as Claire Byrne presents from her shed for a second week (RTÉ One, 10.35pm).

As has already been reported, her worst fears about the cold symptoms she came down with seven days ago were confirmed when she tested positive for coronavirus.

In a broadcast that is more human interest than current affairs, Byrne candidly outlines her experience of Covid-19. The eerie lack of a high temperature, the slow simmer of aches and coughs. And then the nights she felt she could not breathe (she is on the mend, thank goodness). As a viewer, your throat tightens and muscles twitch even as a tiny part of your brain wonders why she got rid of that lovely lamp from last week.

She also speaks of her guilt over having potentially infected others while unaware she had become a transmitter of the virus. It is a very human response – no matter that, without any reason to suspect she had Covid-19, she no has cause for remorse.

However, simply by sharing what she went through she puts a human face on what it’s like to contract Covid-19. At the moment, many of us lack a personal context through which to process everything that is happening – of course that is starting to change – and Byrne is to be commended for her frankness and her cool-headedness. Candour without melodrama is what is called for at this point in time.

Sadly, it is rather downhill from there in an episode that, following the informative and, by necessity, unnerving Claire Byrne Live Covid-19 specials of the previous fortnight, feels like the underwhelming third part in a trilogy. A great deal of nothing is articulated by Minster of State Helen McEntee as, back in the studio, she is pressed by Sarah McInerney as to whether Ireland will move towards a full lockdown, as just implemented in the UK.

And there are flashes of that tiresome Irish exceptionalism by which we believe we are so much nicer and kinder than everyone else as the discussion turns to our supposed remarkable fortitude in times of crisis. There is fortitude all over the globe – though, given the challenges, all the fortitude in the world may not be enough. Let’s save the self-congratulations until we’re out the other side.

The British government’s belated crackdown on public gatherings is meanwhile criticised as too little too late by Channel 4 presenter Jon Snow, skyping from the minimalist kitchen where he is self-isolating after a trip to Iran. Because we are still human many of us are more interested in his kitchen than what he has to say. Alas there isn’t much to see from a voyeuristic perspective (you show nothing, Jon Snow).

But the most impressive guest is retired Co Mayo GP Ken Egan who, at 75, is coming back to do his bit. He is refreshingly frank – yet also gives us something to cling too. Ireland survived TB, polio, Aids. We’ll survive this too, he says, though we need to loudly and bluntly tell people to stay away from one another.

His lack of sentimentality is striking. As is his pragmatic optimism. We’ll need it – and lots more – in the days and weeks ahead.