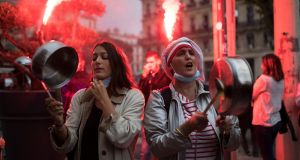 Restaurant owners bang ladles against saucepans at a demonstration against restaurant and bar closures in Marseilles. Photograph: Daniel Cole

From Saturday, Grenoble, Lille, Lyon and Saint-Etienne will be subject to the same restrictions already in place in Paris, Marseilles and Guadeloupe.

Maximum alert means all bars, cafes, sports clubs and swimming pools must close. Restaurants cannot serve more than six people at one table and are required to keep a registry of clients for contact tracing.

Toulouse and Montpellier are expected to go on maximum alert on Monday.

Bordeaux, Nice, Rennes and Rouen are on high alert, one level below. They will be joined by Dijon and Clermont-Ferrand from Saturday, meaning that bars and cafes must close by 10pm.

French authorities use the rate of incidence, the reproduction or R rate and the percentage of positive tests to classify Covid risk.

An estimated 116 people per 100,000 in France now carry the virus. The reproduction rate is estimated at 1.1 or 1.2 people contaminated by each person infected, compared to 3 at the highest point of the epidemic last March, Mr Véran said.

Nine in every 100 people tested are testing positive, compared to 1 per cent when France emerged from a two-month-long lockdown in May.

Santé Publique, the organisation responsible for providing statistics on the epidemic, said an all-time record of 18,746 new cases of infection were recorded from Tuesday to Wednesday.

Opinions vary as to whether France is undergoing a full-blown second wave of the epidemic. Cases are expected to peak in early November.

The Paris regional health authority ARS on Thursday racheted up its “white plan”, giving hospital directors authority to cancel holidays and reassign medical personnel. About 40 per cent of intensive care beds in the Paris region are now occupied by Covid patients. If the rate reaches 60 per cent, surgery for other conditions must be cancelled.

A study of vulnerability and prevalence of Covid-19 in the Paris region conducted during the summer by Médecins sans Frontières, Epicentre and the Institut Pasteur and published this week found extremely high rates of Covid infection among the capital’s most vulnerable residents. Infection rates were as high as 94 per cent in one worker’s hostel.

Finance minister Bruno Le Maire, who recently recovered from Covid-19, said the French were nearly as worried about the economy as they were about health. The government has already spent €6 billion on a solidarity fund for small and medium-sized enterprises.

“We have decided to enlarge and strengthen the solidarity fund,” Mr Le Maire said. It was until now reserved for the tourism, entertainment, culture and sports sectors. That will be extended to florists, laundries, booksellers on the quays of the Seine, caterers and graphic artists.

Until now, the fund was reserved for businesses with fewer than 20 employees. Businesses with up to 50 employees will now be eligible. The only requirement is that they have been forced to close or have lost 70 per cent of turnover.

France’s furlough job-retention scheme, which Mr Le Maire credited with having saved hundreds of thousands of jobs, will continue at least until the end of the year.

Businesses benefiting from the solidarity fund will also be exempt from social charges. The 75,000 newly eligible businesses will be reimbursed all social charges since last February. The government is also providing low-interest, seven-year loans with a maximum interest rate of 2.5 per cent.

After disastrous handling of the shortage of face masks last spring, the administration appears to have botched testing and tracing. The data base on Covid-19 testing, known as Sidep, showed that as of October 1st, it took on average 3.3 days for a person suffering from symptoms to obtain a test, followed by a wait of 2.7 to 5.2 days to obtain the results, Le Monde reported.