Stephen Collins: Coalition shows it has the courage to govern

Having said no to Nphet once, it will be easier to do so next time the need arises 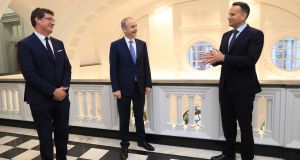 The open breach between the Government and the National Public Health Emergency Team (Nphet) is a positive development. The decision by the three Coalition leaders to reject an immediate return to a national lockdown showed they had the courage to govern rather be bounced into a move that would have had immediate and terrible effects on the economy and society.

The decision by our political leaders to take back control of the fight against Covid-19 from unelected public officials was a risky step, but it was the right one. Ultimately the Government is answerable to the people for the decisions it takes. That is not the case with officials, including the chief medical officer, whose job it is to advise as best they can but who do not have the wider responsibility of governing in the interests of society as a whole.

Ultimately the Government may feel it is necessary to move to a Level 5 lockdown but, before they take that decision, Ministers will have to decide if it is a proportionate response to the threat now posed by coronavirus. There is a real debate to be had about whether the truly appalling economic and social consequences of the lockdown cure might be far worse that the disease itself.

Micheál Martin and Leo Varadkar were clearly annoyed by the way Nphet appeared, without prior warning, to have publicly attempted to force their hands last Sunday, but in a way they were lucky that it gave them the perfect excuse to say no. Having said no once, it will be easier to say no next time if they feel the need.

The Taoiseach gained in stature by the way in which he calmly told the country on Monday evening that we were in a very different situation to last March and that it was not yet appropriate to impose Level 5 restrictions. He was right to point out that a balance had to be struck between the demands of public health and the need to protect lives and livelihoods, as a return to total lockdown would cost hundreds of thousands of jobs. The sense of relief across the country after his address was palpable.

The Tánaiste was even more blunt on television shortly afterwards but he was right to point out that no other country in Europe, including those with much higher infection rates than our own, were currently in the kind of lockdown being advocated by Nphet or even contemplating going there. His reference to public health officials giving such draconian advice not having to worry about losing their jobs or seeing their businesses go bankrupt drew some criticism but he was merely stating the obvious.

Even before last weekend Varadkar had attempted to shift the focus from the number of coronavirus cases to the number of hospitalisations and deaths. So far these have not increased at anything like the rate of infections, and while that might well change in the coming weeks and months, they are the crucial numbers on which future decisions will have to be made.

Finding the right strategy to enable the country to live with the virus will clearly not be easy. The Government here is in the same position as its counterparts all around the world in attempting to strike a balance between suppressing the virus while not destroying the economy. Eliminating it is simply not feasible in this country with its Border. Boris Johnson’s text to the Taoiseach on Sunday night only confirmed this.

Of course, it is not only the Government that has to strike a balance. The public needs to follow current advice with greater care if more draconian restrictions are to be avoided. There is anecdotal evidence about the number of Dublin-registered cars in various holiday destinations around the country that suggests there is significant flouting of the rules.

The other side of the equation is that the media has a role to play in not terrifying impressionable people into believing we are living through the Black Death. As the courageous Dr Martin Feeley has pointed out, the unrelenting focus by RTÉ on case numbers as the main item in its nightly news bulletins is accentuating gloom and despondency across the nation.

Imagine if the national broadcaster were to apply the same approach to other health issues. Each year more than 43,000 people are diagnosed with some form of cancer and more than 9,000 people die of the disease, far more than are likely to die of Covid-19 this year. What would the impact on the mental health of the nation be if the nightly RTÉ television news began every week night with the announcement that 150 people had been diagnosed with cancer today and another 30 had died?

Dr Feeley, who lost his post as clinical director of Dublin Midlands Hospital Group as the result of his carefully argued opinion, has brought a much needed sense of proportion into the public discourse by arguing that we have to take a new look at the kind of restrictions society can bear.

The Government made the right call this week, and from now on should treat Nphet advice with caution.