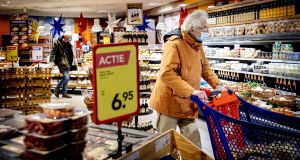 A customer wearing a face mask in a supermarket in Amsterdam. It is now required to wear a mask in indoor public spaces in the Netherlands. Photograph: Koen Van Weel/AFP via Getty Images

After more than nine months of claim, counterclaim and downright confusion, masks finally became legally compulsory on Tuesday in all indoor public spaces in the Netherlands – where the daily number of new Covid-19 cases has stalled between 4,000 and 6,000 for the past three weeks.

The decision to make masks obligatory for everyone over 13 years on pain of a €95 fine required emergency legislation that took effect on December 1st, delivering a psychological shock to the instinctively liberal Dutch, many of whom believe it should remain a matter of personal choice.

Despite more than 10,000 coronavirus-related deaths those misgivings have been reinforced by the National Institute for Public Health and the Environment, which still takes the view that the benefit of wearing non-medical face coverings is “small” to the point where it’s impossible to say it has any effect at all.

That divergence of opinion was strikingly underscored when a second wave of the virus sent the number of daily cases crashing through the 10,000 mark, forcing premier Mark Rutte to “urgently advise” the wearing of masks from October 1st in anticipation of the new legislation.

However, the latest six-weekly attitudes survey carried out for the government shows that the Dutch public may finally be coming round to the idea that individual behaviour will have to change if the pandemic is to be controlled, especially in the three weeks left to Christmas.

Although surveys during the summer showed that as many as eight or nine people out of 10 continued to go to work or to the supermarket while believing they might actually have the virus, the latest poll, taken on November 11th and 15th, is less sanguine.

While there is no sign of a sea-change it shows that 62 per cent of people are avoiding public places, up from 52 per cent a month ago. Some 58 per cent say they would have a test if they felt they had symptoms, up from 42 per cent.

More problematically only one third said they believed it necessary to self-isolate if they became infected or were waiting for a test result.

Although the Netherlands has been in “partial lockdown” since mid-October, and is one of the last European countries to make face coverings obligatory, questions remain about how the new law will be enforced.

The country’s main supermarkets, for instance, have said they will “inform customers about the obligation” but will not refuse to serve those who do not comply because enforcing the law is not their job.

The Netherlands’ latest figures on Tuesday afternoon showed a decline of 8 per cent in the weekly total of new cases, from 36,931 to 33,949. The daily increase was 4,073.

There was a marginal drop from 193 to 183 in intensive care numbers during the week, with 403 additional deaths.

The R number, indicating the rate at which the virus is spreading, remains at 1.04 – most likely still too high to allow any easing of restrictions for Christmas.