‘The system is strong’: Arizona and Wisconsin certify Biden’s US election wins 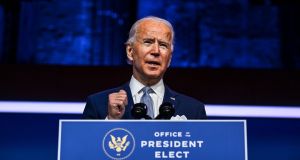 US president-elect Joe Biden: Electoral college delegates will meet in their states on December 14th and send results to Congress. Photograph: Chandan Khanna/AFP via Getty Images

Arizona and Wisconsin on Monday certified US president-elect Joe Biden as the winner in their presidential elections, formalising his victory in two additional battleground states as President Donald Trump’s effort to overturn the results of the election continued to fall short.

Such certifications would be an afterthought in any other year. But in a political environment where Mr Trump’s false claims of sweeping voter fraud have created an alternate reality among his die-hard backers in the West Wing and beyond, the results have closed off yet another path to victory for him.

Although Mr Trump has infused daily drama into the normal post-election bureaucratic process by urging his Republican allies to push to block the certification of results or to overturn them entirely in battleground states won by Mr Biden, the proceedings on Monday were staid affairs.

In Arizona, Katie Hobbs, the Democratic secretary of state, formalised her state’s results while sitting at a long table with three Republicans who signed the election documents: governor Doug Ducey; the state’s attorney general, Mark Brnovich; and the chief justice of the Arizona supreme court, Robert M. Brutinel.

Ann Jacobs, chair of the Wisconsin Elections Commission, signed a document during a three-minute video conference in which she narrated herself certifying Mr Biden’s victory. “I am now signing it as the official state determination of the results of the November 3rd, 2020, election and the canvass,” Ms Jacobs said before holding the document up to the camera.

Later on Monday afternoon, governor Tony Evers of Wisconsin, a Democrat, announced that he had signed the state’s Certificate of Ascertainment appointing Mr Biden’s slate of electors to represent Wisconsin at the electoral college.

Mr Trump, buoyed by his legal team and supporters in the conservative news media, has held out hope that he could somehow prevail in Wisconsin and Arizona, as well as Georgia, where Republican officials on Monday firmly refused to challenge Mr Biden’s victory there.

In all three states, along with Michigan and Pennsylvania, the other two states that flipped from voting for Mr Trump in 2016 to Mr Biden this year, the Trump campaign has sought to undermine the results through legal and public relations efforts aimed at delivering the president electoral college votes.

But as has been the case elsewhere, elections officials from both parties in Arizona and Wisconsin declined to undercut their state laws to overturn the popular vote in their states. “We do elections well in Arizona,” Mr Ducey said on Monday as he signed documents certifying Mr Biden’s Arizona victory and awarding him the state’s 11 electoral college votes. “The system is strong.”

In Wisconsin, Ms Jacobs chose to certify Mr Biden’s victory there one day before the state’s December 1st deadline to do so.

Ms Jacobs’s certification followed the conclusion of recounts, requested and subsidised with $3 million from Mr Trump’s campaign, in Dane and Milwaukee counties, that found Mr Biden had added 87 votes to his state-wide margin.

Ms Jacobs, a Democrat from Milwaukee, said that certifying the result of the presidential election came at her discretion and that she expected the move to kick-start legal challenges from the Trump campaign.

“The power to do this is vested solely in the chair,” Ms Jacobs said in an interview on Monday.

All states must exhaust legal challenges by December 8th. Electoral college delegates will meet in their states on December 14th, sending the results to Congress, which is scheduled to resolve any final disputes and certify the electoral college vote on January 6th.

Unlike in other states where the Trump campaign has claimed, without producing any evidence, that widespread fraud led to Mr Biden’s victories, Mr Trump’s legal strategy in Wisconsin is predicated on an effort to throw out hundreds of thousands of absentee ballots on what amounts to a technicality.

That argument would throw out hundreds of thousands of ballots across Wisconsin, including those cast by prominent Trump supporters, such as several state legislators and a top lawyer for the president in Wisconsin, Jim Troupis, according to the Milwaukee Journal Sentinel.

On Twitter on Monday, Mr Trump called for governor Brian Kemp of Georgia, a Republican, to “overrule” Brad Raffensperger, the Republican secretary of state. The president also claimed baselessly that there had been “total election corruption” in Arizona. The Trump campaign has yet to identify any systemic voter fraud in its court challenges.

Republicans on Wisconsin’s six-member bipartisan elections commission had said that they hoped Ms Jacobs would wait to certify the presidential election results until after the Trump campaign had exhausted its legal challenges. But the Trump campaign has not filed any lawsuits in Wisconsin; it had nothing to challenge until Ms Jacobs certified the results of the election.

The Trump campaign and Wisconsin Republicans are also expected to challenge Ms Jacobs’s authority to certify the election results on her own.