Coronavirus: France orders masks be worn in all workplaces 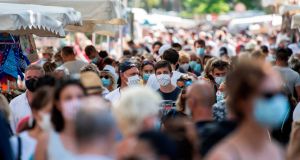 Face masks will be required in all French offices, except for enclosed spaces occupied by only one person, from September 1st, labour minister Élisabeth Borne announced on Tuesday. Employers will be required to pay the cost of the masks.

The measure was recommended by the health council in a report on airborne transmission of coronavirus last week. The wearing of masks was until now encouraged but optional. The two-week grace period is intended to give businesses time to prepare.

A second wave of the pandemic is judged probable when summer holidays end. Infections are on the rise in 52 of 96 mainland French departments. The worst-hit regions, Paris and the Bouches-du-Rhône, have been classified “zones of active circulation” of the virus.

“The epidemic is not restarting like in March,” said Philippe Juvin, head of emergency medicine at Georges-Pompidou Hospital in Paris. “There are a lot more cases, but they are less serious.”

Between a fifth and a quarter of infections are occurring in workplaces. The regional health authority for the Île-de-France (Paris) region reported on August 16th that more than a quarter of 73 recent outbreaks occurred in professional environments.

Ms Borne asked employers to continue to allow people to work remotely wherever possible, to reduce the risk of transmission in the workplace and to avoid congestion on public transport.

Employers have been required to provide 4sq m of space for each employee since the lockdown was lifted. By the end of May, half of French employees had returned to work.

A study by the Confederation of Small and Medium-sized Enterprises, quoted by Le Monde, estimates that masks, sanitising gel, social distancing and daily disinfection of workplaces costs €100 per employee each month.

The government is struggling to balance public health with the imperative of saving the economy. The Organisation for Economic Co-operation and Development reports that France will be the second-most-damaged developed economy, after Spain, if a second wave of the epidemic takes hold.

Patrick Martin of the business management syndicate Medef warned against “generalised coercive measures” and said the requirement to wear masks in offices “indicates to employees that the pandemic is back in full force, which is not the case at the moment. We mustn’t send the wrong signal that our country is going to shut down, because that would be lethal for employment.”

Most French cities, including Bordeaux, Le Havre, Marseilles, Nantes, Nice and Paris, have made masks obligatory on busy streets. Some advocate a blanket requirement for masks everywhere outside the home.

The cost of masks has risen from an average of 5 cent before the lockdown to €1. Numerous politicians are calling on the government to provide masks free of charge. “Supermarkets are making profits on masks,” Manuel Bompard, an MEP for the far-left party France Unbowed, complained to LCI television.

Laurent Jacobelli, spokesman for Marine Le Pen’s far-right Rassemblement National, told France Info radio it would be unjust to discriminate “between families who can afford masks and protect themselves, and those who cannot”.

Prime minister Jean Castex, who oversaw the exit from lockdown before his appointment on July 3rd, wants Covid regulations to be decided at local level wherever possible. The results can be confusing, with rules varying according to location.

In an open letter published by Libération newspaper, French doctors pleaded for masks to be made obligatory in classrooms. Education ministry instructions at the end of July considerably eased earlier rules. Teachers and parents are clamouring for an update before schools reopen on September 1st.

The August 21st football match between Olympique Marseille and Saint-Étienne, which was to have relaunched the first division championship, has been postponed for one month, after three Marseille players tested positive for Covid-19. Forty football players from 11 French clubs have contracted the virus.