Russia warns EU leaders over Belarus ahead of crisis talks

Protests and strikes continue after disputed election and brutal crackdown

Footage has been released of Alexander Lukashenko confronting a worker at a tractor factory after the Belarusian president faced heckling and chants of "step down" during a speech at the state-run facility. Video: Reuters 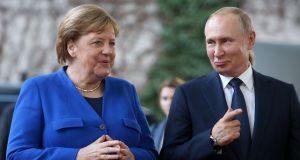 Russia has warned European powers that foreign interference in Belarus would be “unacceptable”, as EU leaders prepared for emergency talks on a crisis that could become a new flashpoint in relations between Moscow and the West.

Diplomacy is intensifying around Belarus as its autocratic ruler of 26 years, Alexander Lukashenko, faces mass rallies and strikes against the conduct of recent presidential elections and a subsequent crackdown on peaceful protesters, in which at least two people died, hundreds were hurt and about 7,000 detained.

Facing the biggest crisis of his career, Mr Lukashenko blames foreign “puppet masters” for the unrest and claims Nato forces in neighbouring Poland and Lithuania are a threat to his nation. He has put troops near his country’s western border on combat alert, and Russia has pledged to provide security assistance to Belarus – its partner in a loose “union state” – if it faces danger from abroad.

In phone conversations on Tuesday with German chancellor Angela Merkel and French president Emmanuel Macron, Russian president Vladimir Putin said the Kremlin would not accept any foreign “meddling” in Belarus.

Dr Merkel’s spokesman said she “stressed that the Belarusian government must avoid violence towards peaceful demonstrators, immediately release political prisoners and start a national dialogue with the opposition and society”.

According to the Élysée Palace, Mr Macron urged Russia to support dialogue and said the EU wanted “to play a constructive role alongside the Belarusian people” to find a political solution that “respects the aspirations that have been expressed peacefully and massively for several days”.

Taoiseach Micheál Martin has said he will use Wednesday’s video conference of EU leaders to share the State’s views on the crisis, adding that “people of Belarus deserve to have free, fair and transparent elections”.

Minister for Foreign Affairs Simon Coveney has praised “the many thousands of people who have made their voices heard . . . notwithstanding the very real threat that they have faced to their personal liberty and safety.”

“Ireland does not accept the election result as a true reflection of the democratic will of the Belarusian people,” he said.

The biggest protests ever seen in Belarus erupted after Mr Lukashenko declared victory in the August 9th election with an implausible 80 per cent of votes, and widespread police brutality towards protesters and images of the injuries inflicted outraged many of the country’s 9.5 million people. Dozens of demonstrators are reportedly still missing following last week’s violence.

Pressure on Mr Lukashenko (65) has grown with the spread of strike and protest action across the nation and among people who were seen as his most loyal supporters, including state factory workers, journalists at state media that broadcast his propaganda, and current and former police and military officers.

Opposition leader Svetlana Tikhanovskaya (37), who claims to be the rightful winner of the election, fled to Lithuania last week after allegedly being threatened by the regime.

Her team has formed a “co-ordinating council” to oversee the transfer of power, which includes Nobel Prize-winning Belarusian author Svetlana Alexievich. Mr Lukashenko on Tuesday denounced the move as “an attempt to seize power, with all attendant consequences”.