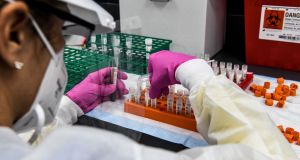 The two confirmed cases of the virus involve a member of staff and a patient who were both on the same ward. Photograph: Chandan Khanna/AFP via Getty Images

An “outbreak control team” has been established at University Hospital Limerick after one patient and one member of staff on a ward tested positive for coronavirus on Tuesday, a hospital spokesman has confirmed.

The two confirmed cases of the virus involve a member of staff and a patient who were both on the same ward.

“Contact tracing and testing is currently under way and all appropriate infection prevention and control measures are being followed in line with the national HPSC [Health Protection Surveillance Centre] guidance,” a hospital spokesman said.

“A number of staff from the ward at the centre of what we believe to be a localised outbreak have been identified as contacts. They have been asked to stay off work and to self-isolate in line with national guidance.”

The hospital said that it had completed “initial testing of all patient contacts” and this “has not identified further cases”.

“Initial testing of all staff contacts is expected to be completed tomorrow, Wednesday, August 19th. All patients on the ward in question have been informed of the outbreak,” the spokesman said.

Noreen Spillane, chief operations manager of UL Hospitals Group, said that “hospitals have been preparing for these situations for many months and we have now established an outbreak control team to put into operation our measures to protect the safety of patients and staff and to protect public health more generally”.

“This is the first outbreak of Covid-19 to have occurred in UHL since the start of the pandemic. This is unfortunate but we have every reason to believe that this is a limited outbreak that is contained in the ward in question,” Ms Spillane said.