Mali’s president is detained by soldiers amid mutiny 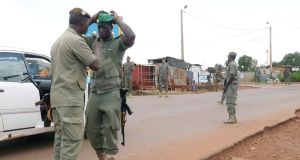 Malian troops, believed to be part of a detachment possibly mutinying, man an impromptu checkpoint in Kati, Mali, on Tuesday. Photograph: AP Photo

Soldiers had earlier in the day mutinied at the Kati military base about 15km outside of Bamako and rounded up a number of senior civilian and military officials.

A spokesman for Mr Keita could not be reached for comment.

A mutiny in 2012 at the Kati base led to a military coup that toppled then president Amadou Toumani Touré and hastened the fall of Mali’s north to jihadist militants, who continue to operate across the north and centre of the West African country.

Mr Keita has faced mass protests since June calling for his resignation over alleged corruption and worsening security.

The US, France and the Economic Community of West African States all condemned the mutiny. – Reuters