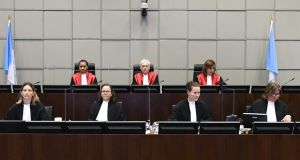 Presiding Judge David Re, Judge Janet Nosworthy and Judge Micheline Braidy hand down a judgment in the case of four men being accused over the 2005 bombing that killed former Lebanese PM Rafik al-Hariri, in the Netherlands. File photograph: Piroschka van de Wouw/EPA

Fifteen years after the assassination of former Lebanese premier Rafik Hariri in a suicide car bomb in Beirut, both the Syrian government and Lebanon’s Shia militia Hizbullah have been cleared of involvement – and only one of four men charged in connection with the killing has been convicted.

In a carefully worded assessment of the evidence more than a decade after the UN-backed Special Tribunal for Lebanon opened its doors in 2009, its presiding judge, David Re, confirmed that there was no evidence to link the killing to a larger regional political conspiracy.

The court took the view, he said, that “while Syria and Hizbullah may have had motives to eliminate Mr Hariri and his political allies, there is no evidence that the Hizbullah leadership had any involvement in Mr Hariri’s murder and there is no direct evidence of Syrian involvement”.

Mr Hariri’s son, Saad, also a former prime minister, was in court and said that while he accepted the verdict, he had expected more from the tribunal. “I think everyone’s expectation was much higher but now we must see just punishment for the criminals.”

Hizbullah has always denied involvement in the bombing and as recently as Friday last its leader, Sayyed Hassan Nasrallah, said that if any members of the organisation were convicted, it would stand by their innocence.

Mr Hariri – a billionaire widely credited with the agreement that ended the civil war from 1975 to 1990 – was killed on Valentine’s Day 2005 as his motorcade travelled along Beirut’s seafront just weeks before he was due to stand again for prime minister in fresh elections.

The blast, with the explosive power of more than 1,000 kilograms of TNT, killed 21 others, left 226 injured, and set the scene for years of recriminations between the rival political factions that made up the country’s dysfunctional government and led to the so-called October Revolution last year.

Hariri vehemently opposed Syrian interference in Lebanon. There had been fears as a result that a judgment naming either Damascus or the Hizbullah militants it supports could have sparked new violence in a city still on edge after the massive ammonium nitrate explosion earlier this month.

Although the Hizbullah leadership has not been found culpable, the only one of the four defendants convicted in absentia on Tuesday was a Hizbullah member who “played a central role in the execution of the attack” and possessed one of six mobile phones used by the assassination team.

Three others – Hussein Onessi (43), Assad Sabra (41) and Hassan Merhi (54), all allegedly also Hizbullah members – charged as accomplices in the killing were acquitted on grounds of insufficient evidence.

A fifth defendant, Mustafa Amine Badreddine, was removed from the case after being killed in shelling near Damascus airport in 2016.