Minneapolis police clash with protesters near the spot where George Floyd died during his arrest earlier this week. Video: CBS/Reuters 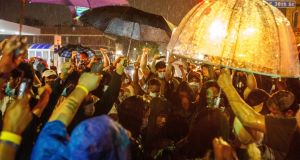 Protesters gather under the rain near the spot where George Floyd died while in custody of the Minneapolis Police, on Tuesday night. Photograph: Kerem Yucel/AFP via Getty Images

Police and protesters clashed in Minneapolis on Tuesday evening following a demonstration at the intersection where George Floyd was killed in an altercation with several police officers the day before.

Hundreds of protesters gathered in the city on Tuesday evening to demand justice after Floyd, who was African American, was killed when a white Minneapolis police officer knelt on his neck as he lay on the ground during an arrest. Footage of the incident showed Floyd shouting “I cannot breathe” and “Don’t kill me!”

A large and diverse crowd had gathered at the start of the protest, with some carrying signs reading “I can’t breathe” and “Jail killer KKKops” and chanting “Prosecute the police.” Activists had blocked traffic for several blocks in every direction, and the crowd spilled out into the streets. News choppers hovered overhead and TV camera operators had found their way on to the roof of the building across the street from where protesters spoke.

The Twin Cities have seen several consecutive years of protests against police killings of black men, and in one case, an unarmed white Australian woman, but the gathering on Tuesday was one of the largest the metro area has ever seen.

When asked why they had come, most people spoke about the need for police accountability, before inevitably turning to remembering Floyd’s unheeded final pleas. “It could have been my son. It could have been me. It shouldn’t be,” said a protester carrying a sign saying “Lock them up.”

A group of riders from the Vital Kings, a black motorcyclist club based in St Paul, accompanied the protesters, revving their engines over and over, the ear-splitting noise reverberating off the concrete. “We wanted to make some noise for the crowd. This is my voice,” one of the riders said.

Just before I interviewed this man across the street from the third precinct, one of the officers in riot gear walked down the line of police chanting something close to "Take the precinct back," as if he were trying to pump them up. They repeated it, like a call and response. pic.twitter.com/OIjqUFb5zK

From the intersection, protesters marched through the neighbourhood to a city police precinct, where a small but angry and persistent crowd faced off for hours with officers guarding the building.

At the precinct, as the rain came down heavily, windows were damaged and squad cars sprayed with graffiti. Protesters threw water and milk bottles at the officers, shouting “pigs” and “how could you”. Police fired green tear gas and stun grenades to disperse the crowd approaching the station. Dozens of protesters gathered in a Target parking lot.

Minneapolis police did not immediately respond to a request for comment.

Floyd died late on Monday, when officers responded to a call from a grocery store that claimed he had used a forged cheque. Police said Floyd “physically resisted officers” while possibly under the influence of drugs or alcohol.

In the video footage, witnesses can be heard shouting at officers to get off Floyd’s neck. One yells: “Bro, he’s not even fucking moving!” Another asks if “you’re going to just sit there with your knee on his neck?”

In a press conference on Tuesday, the Minneapolis police department confirmed he “died a short time” after a “medical incident”, after being transported to hospital.

“[They] were able to get the suspect into handcuffs and realised that the suspect was suffering a medical distress,” a spokesman said, saying officers “called for an ambulance”.

The Minneapolis mayor, Jacob Frey, apologised to Floyd’s family on Tuesday morning, saying “[Floyd] should not have died.”

“For five minutes we watched as a white officer pressed his knee to the neck of a black man,” Frey said. “For five minutes. This officer failed in the most basic human sense.”

The FBI and authorities in Minnesota announced on Tuesday they had launched an investigation into Floyd’s death, and the incident is being investigated by the FBI for possible civil rights violations. Four police officers involved in the incident have been fired. – Guardian