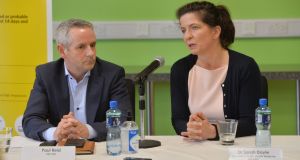 More than 1,000 staff from across the public service will, in the coming weeks, be involved in tracing the contacts of those who test positive for Covid-19. It will be one of the largest mobilisation and redeployment exercises in Irish public service history.

Contact tracing is one of the essential tools available to health authorities, along with testing and isolation, to try break the chain of coronavirus infection and reduce the numbers with Covid-19. The more staff involved in tracing, the more contacts can be followed up.

HSE chief executive Paul Reid has said contact tracing will be divided into three separate phases. About 200 people will be involved in the first element, to deal directly with those people who test positive for Covid-19, while up to 1,000 may be engaged in the two later phases, taking details of contacts of the person affected and then contacting those individuals.

The trigger for the contact tracing comes when public health authorities are officially notified by laboratories of the identity of a person who has tested positive for Covid-19.

Specialist in public health medicine Dr Sarah Doyle says the first call to the person with the condition will be made by someone with a clinical background – a doctor, a nurse or other health professional. Some of the staff will be HSE personnel, while others may be from the universities or from health watchdog Hiqa.

Dr Doyle says individual with confirmed case will be taken through the HSE advice for the condition, including infection-control and self-isolation. They will be asked to think about those they had close contact with since they started to develop symptoms. She says these are defined, based on European public health advice, as being people with whom there was face-to-face contact within two metres distance for 15 minutes, or those with whom two hours was spent in the same room.

Dr Doyle says that if the individual concerned worked , for example, in a healthcare location, a prison or other setting involving large numbers of people in close confinement, their case would be considered to be “complex” and would be managed directly by their local department of public health.

In other circumstances., the person will receive a second call to go through the details of the contacts they were asked to try to recall. The second caller may not necessarily be someone with a clinical background. They could be from someone who had previously worked elsewhere in the public service but who had received specific training from the HSE.

The second caller will record the names and contact details of individuals identified by the person with the confirmed case. This information will be logged in the IT system of the health authorities and used as the basis for the third part of the tracing exercise.

The third call will involve contacting people and advising them they had been in contact with a person who has contracted Covid-19.

As of last week the HSE had trained about 725 people, largely from various Civil Service departments, to carry out contact tracing. The trade union Fórsa said special needs assistants, who it represents, may be reassigned to other posts now that schools were closed, most likely to work on contact tracing.

At present, the HSE is understood to have more trained contact tracing personnel than it needs. However, additional staff are likely to be required in the weeks ahead as the coronavirus crisis deepens.

The HSE said regional public health departments have redeployed staff to support the initial surge in cases. It said operational locations included Hiqa offices in Dublin and Cork, the Curragh Army barracks and UCD and DCU.

“The next organisations to be mobilised will include University College Cork, NUIG, Revenue Commissioners (Limerick) and others will follow shortly after,” the HSE said.

Healthy one day, ventilated the next – a Covid-19 survivor’s story