We’re from Europe and we are here to help: can EU help fight recession? 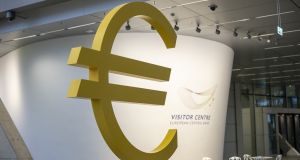 The European Central Bank has so far provided the most telling support for economies reeling under the impact of Covid-19. Photograph: Alex Kraus/Bloomberg

Can the EU help us through the economic crisis?

Yes. In principle in three main ways. One is by the European Central Bank (ECB) making it easier for states to borrow money by holding interest rates down on the market. The second would be a move by EU states to borrow collectively on the markets – eurobonds – which would be likely to ensure a low interest rate on cash which could then be used by member states. The third is via EU institutions like the European Investment Bank, or even the European Stability Mechanism, the rescue fund set up after the crisis, providing credit to the Government or parts of the financial system.

What has happened so far?

The most significant move was last week’s announcement by the ECB of a special €750 billion bond-buying programme to last at least until the end of the year. This is designed to help keep interest rates low on the markets and, if it works, will help countries like Ireland raise cash to pay for the vast increases in spending now required.

When the programme was announced last week, there were reports that it led to tensions on the ECB council. However the initial announcement was that the ECB would interpret the rules surrounding its bond-buying flexibly. This was clarified on Thursday in an important legal text from the ECB.

So what did it say?

The ECB generally buys government bonds hemmed in by two main restrictions. The first is that it cannot hold more than one-third of the eligible bonds issued by any country – the legal decision now published says that will not apply in the case of the pandemic programme.

The second constraint is that bonds must be bought roughly in proportion with the size of EU countries. This rule remains, but the ECB has given itself a lot of flexibility.

The response can be seen on the markets. Ireland’s 10-year debt has been trading at negative interest rates recently but had drifted into positive territory over the past couple of weeks. On Thursday morning, the rate fell from 0.25 per cent to just above 0.1 per cent after the ECB announcement.

Of course, it is early days and no one knows how the markets will react in the weeks and months ahead as exchequers worldwide seek to raise massive sums of cash. Serious wobbles are possible. But ECB support is vital in keeping borrowing rates down for Ireland and, were we able to raise some of the required borrowings at anywhere near current rates, it would be a huge boost.

Why is this significant?

The rules under which the ECB operates mean it is not meant to finance borrowings by EU member states. By intervening on such a scale, it is arguably coming very close to doing just that.

What about other support from the EU?

EU leaders at a video conference on Thursday tasked finance ministers with the job of working out how credit lines could be made available to countries needing funds. This would use the ESM, the bailout fund, but there are questions about how this would work and what conditions might apply.

Use of the fund can also open up another avenue or ECB support for a national bond market where it can buy bonds of a member state without restrictions, but the separate ECB move probably makes this unnecessary for now. There will be huge sensitivity, given the circumstances, to anything resembling a bailout for any country with tough financial terms and conditions.

What about commonly guaranteed borrowings, or so-called eurobonds?

Ireland is one of nine countries that have called for this to be examined. On Thursday night it turned into a highly contentious issue during a teleconference of EU leaders and looks most unlikely to happen any time soon.

If money is raised centrally, everyone gets funds at the cheapest possible rate as risk is spread across the whole group and investors realise there will never be a default. However northern EU states like Germany and the Netherlands appear to remain opposed to this, for now at least.

Other EU institutions, such as the European Investment Bank, can also provide some assistance in terms of co-funding investment programmes and providing credits to banks to allow them to support businesses through the crisis. But it is the ECB which, so far, is providing the big bazooka.