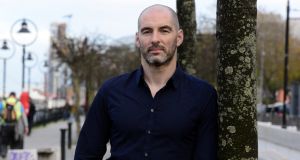 That wedding? ‘I just needed to wait until it was on my plate and deal with it then,’ says Richie Sadlier. Photograph: Cyril Byrne

“I’ll never be able to cope,” I said. “Seriously, how am I gonna get through it? There’s no way I’ll manage.”

I was trying to get off drink and the prospect of attending an upcoming wedding filled me with fear and anxiety.

“How the hell will I stay off drink at a wedding where everyone’s hammered? And even if I do stay sober, how boring is that gonna be? What’s the point in me even going? Jesus, am I gonna have to tell one of my best mates I can’t make his wedding?”

The more I thought of it, the worse I felt. Every scenario I imagined was negative so my head was wrecked.

“When is it, Richie?” asked a mate. He was further down the road of recovery from alcoholism than I was then, and he was listening patiently to my worries as we walked around Marlay Park. I told him the wedding was happening in 10 months’ time, somewhere in Spain. The save-the-date text had just arrived that morning. I was on the shortlist to be best man so the prospect of doing a speech had me in knots. This wedding was my main concern this particular afternoon, but at the time I was fearful of the future in many different ways.

“I’ll give you some advice I was given years ago, “he began. “Yesterday’s dinner is gone, and tomorrow’s hasn’t been cooked yet, so don’t waste time and energy imagining what it will taste like.” He had a metaphor for everything, and his only motive was to help, but what he said next has become the approach I’ve tried to live by ever since.

“Just give all your attention to what’s on your plate today.”

It was a variation of the advice our mother gave us throughout our childhood: “Do today’s job today.” In good or bad times, staying in the present and making the most of the situation was always her way. In this strange new world of mine, alcohol was no longer available to support, relax, energise, console or excite me. Everything was different, everything was new, and everything kept changing. The moment certain hurdles were cleared, new ones appeared from nowhere. Memories from the past would completely throw me, concerns about the future would paralyse me, and for the first time I couldn’t just get drunk and make them go away.

To adapt to this new normal, I needed to change too, so I followed his suggestion to start living life one day at a time.

There were times early on when I felt it was a little patronising, as if it was a sign of my limitations. Don’t be worrying about all that serious stuff, there’s a good lad. I remember also thinking it was all a bit head-in-the-sand to consciously forbid yourself from considering all the worst consequences of any situation. Other times, I was adamant it was too limited an approach for me and I was capable of something more complex. I was smart enough, old enough, sober enough, or so I thought. Every single time, though, regardless of the context, I learned the hard way that the simplest approach is the best one for me.

So, given that I can’t predict the future or know how I’ll cope with how it unfolds, my daily focus is simply to meet the challenges of today. And from what I can tell so far, it’s an approach that works for me, even when we’re facing a global pandemic.

Like everyone else I know, my plate today has an unfamiliar look to it. With no sports being played, my work as a sports pundit has stopped. Seeing clients in my psychotherapy practice is not possible at the moment, and I can’t give mental health talks to students because nobody’s at school. Other projects have been postponed or cancelled altogether. My income, routine, career and mental health are all impacted, and nobody can tell me with certainty when the situation will change.

Throw in the concerns I have for people I know that are in vulnerable situations, and the temptation to panic about the future is very real. After all, it’s not like there’s a shortage of material there to get me wound up.

I know for certain, however, that I’ve no idea how this situation will develop. I’ve no clue when my routine will return to what it used to be, nor do I know what pain I will experience before it does. I don’t know how wider society will respond to whatever changes and challenges are ahead, nor can I accurately predict how I’ll manage myself through it all. Given the amount of energy I’d expend obsessing about all of these unknowns, I’ve learned the best strategy for me is to limit my thoughts to today.

Other people may have different ways they feel work better for them, but this is the one that gives me the best results.

I wasn’t wrong to feel anxious about the prospect of attending that wedding years ago. Speaking to my mate that day, it was one of the many future events that seemed daunting and beyond me. By the time it arrived, however, I was in a different place in my recovery and I was more than able to handle it. That wasn’t because of the worrying I did about it 10 months earlier in Marlay Park, it was thanks to the way I approached things on the day itself. I just needed to wait until it was on my plate and deal with it then. And I needn’t have bothered worrying about a best man’s speech because I wasn’t even asked.

People aren’t wrong to be concerned about what may lie ahead, or be angry or anxious about the way things have already gone. None of us have any experience dealing with a threat of this nature, and the future is filled with greater uncertainty than ever. Given the many directions this could go, and all the ways we could be impacted, I know it’s better for me to remain in today and stay focused on that.

It took me a lot of practice to readjust my thinking on this, but it’s a simpler, more effective way of dealing with whatever comes my way.

What do you do when you meet a bear on a walk? Copy this 12-year-old
5

Four decent bottles if you’re just getting to know wine, including a great-value sparkler
9