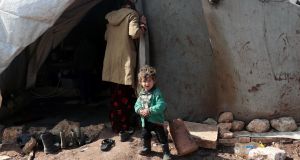 An internally-displaced Syrian child stands outside a tent at a makeshift camp in Azaz, Syria, on Thursday. Photograph: Khalil Ashawi/Reuters

Russian warplanes struck at rebel-held towns in northwest Syria again on Thursday and Turkish artillery supported insurgent attacks elsewhere as officials from the two countries struggled to reach a compromise to halt an escalation in the Syrian war.

In Geneva, the United Nations refugee chief called for a halt to the fighting to allow hundreds of thousands of trapped civilians to move to places of safety.

Syrian troops backed by Russian forces have been battling since December to eradicate the last rebel bastions in Idlib and Aleppo provinces in what could be one of the final chapters of the nine-year-old civil war.

But Turkish president Tayyip Erdogan on Wednesday threatened to launch a military operation against the government forces unless they pulled back, and Turkish troops and weaponry have already massed inside Syria.

Talks between Ankara, which supports some rebel factions, and Moscow to avert a wider war and a possible direct confrontation have struggled to make progress.

Turkish officials sounded more optimistic on Thursday and one said the latest round had not been “completely without a result”.

However, various options were being discussed, including the possibility of joint patrols in the area. Both Ankara and Moscow expected their presidents to “end the issue,” he added.

Turkish foreign minister Mevlut Cavusoglu said there had been some rapprochement with Russia in the talks but they were still not at the desired levels. Ankara and Moscow have accused each other of flouting a 2018 de-escalation agreement that allowed Turkey and Russia to set up observation posts in Idlib.

Turkey has said some of its posts in Idlib are surrounded by Syrian government forces.

Syrian president Bashar al-Assad, whose family dynasty has ruled for nearly half a century, has showed no sign of letting up in the campaign to crush his foes once and for all.

Residents and relief staff said Russian warplanes on Thursday resumed attacks on the towns of Darat Izza and Atareb in the northern corner of Aleppo province, where Turkish troops have set up a line of defence to thwart further advances by the Syrian army and allied Iranian militias.

In Idlib province, Turkish artillery provided cover fire for renewed rebel attacks on Nairab and the strategic crossroads town of Saraqeb, according to rebels and residents.

The Turkish officialsaid the artillery bombardments did not signal that Mr Erdogan had launched a full-scale operation.

Meanwhile there was no end in sight for the misery of the nearly one million people – most of them women and children – who have fled the fighting to seek sanctuary in the border area.

The exodus has overwhelmed relief agencies but Turkey, which is struggling to cope with the 3.7 million Syrian refugees already camped inside its borders, says it can take no more.

In Azaz, about 30km northwest of Aleppo city, Abu Abdallah had been stranded on the road for days. After his family fled the air strikes pounding Idlib, they moved from one village to another but have yet to find refuge. With him were his wife, four children and 20 other relatives.

“I don’t know where to take them,” the 49-year-old farmer said, sitting on his tractor. “God knows where we will go.”

Families are sleeping outside by roads and in olive groves, burning garbage to stay warm. Some children have died from the cold. Some have already been displaced more than once after fleeing battles in other parts of Syria earlier in the conflict.

Aziza Hadaja (70) said this was the third time she had been uprooted but in the past, she would go back home. This time, after government forces marched into her village, she does not know when or if she will return.

Along with her children and grandchildren, Hadaja is now sheltering in a tent in a field on the road out of Azaz.

“We came out with the clothes on our backs,” she said. “We didn’t bring a thing.”

The UN humanitarian affairs agency (OCHA) said the crisis had reached a horrifying level, with more and more displaced people crammed into a small pocket of Idlib.

“Places previously considered safe by civilians are now coming under fire,” it said in a report.

More than 300 people, many of them women and children, had been killed in Idlib and Aleppo due to the hostilities since the start of the year, it said. Indiscriminate attacks had damaged or destroyed hospitals, schools and other civilian sites.

The United Nations High Commissioner for Refugees, Filippo Grandi, called for a cessation of hostilities and appealed for urgent action to help those displaced.

“Thousands of innocent people cannot pay the price of a divided international community, whose inability to find a solution to this crisis is going to be a grave stain on our collective international conscience,” he said.

Mr Grandi appealed to Turkey to let in more refugees and said international support for the civilians must be stepped up.

The Turkish official in Ankara said Turkey, Russia and Iran planned to meet in Tehran early next month to further discuss Syria, including the situation in Idlib. A Russian delegation may come to Ankara before that, he said. – Reuters