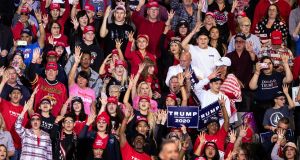 Supporters of US president Donald Trump show four fingers for four more years during a rally for his reelection at the Convention Center in Las Vegas, Nevada. Photograph: . EPA/Etienne Laurent

US president Donald Trump said he is considering four names to become the next director of national intelligence, including Doug Collins, a Georgia congressman who was a staunch defender of his during his impeachment trial, as he prepares to implement changes at the agency.

Mr Trump said a decision would be made in the coming weeks, and comes amid heightened tensions between the president and the intelligence services.

On Wednesday the president announced he was appointing US ambassador to Germany, Richard Grenell, to fill the role on an acting basis.

The current holder of the post, Patrick Maguire, was effectively fired by Mr Trump after being informed that he would not be appointed on a permanent basis. Mr Maguire is required by law to step down next month if he is not named as permanent director having held the position in an interim capacity since September.

Democrats responded furiously to the appointment of Mr Grenell, who has been a partisan defender of the president and a sometimes abrasive presence in Berlin.

“Sadly President Trump has once again put his political interests ahead of America’s national security interests by appointing an acting director of national intelligence whose sole qualification is his absolute loyalty to the president,” said Speaker Nancy Pelosi.

Mr Grenell, who will remain in his job as ambassador, confirmed on Twitter that his new role would be a temporary one.

Mr Trump has a history of appointing senior officials in an “acting” capacity.

Mr Maguire’s departure follows a tense interchange between him and Mr Trump a week ago in the White House, according to reports.

Mr Trump is reportedly unhappy about a classified briefing intelligence officials gave to members of Congress, including Democrats, in which they warned that Russia was already trying to interfere in this year’s presidential election to benefit Mr Trump.

The president raised concerns that Democrats could weaponise the findings, and was particularly annoyed that the chairman of the House Intelligence Committee, Adam Schiff, was present.

On Friday Mr Trump on Twitter accused Democrats of launching “another misinformation campaign” by “saying that Russia prefers me to any of the Do Nothing Democrat candidates”.

Mr Schiff reacted with fury to reports that Mr Trump may have removed Mr Maguire because of the briefing.

“We count on the intelligence community to inform Congress of any threat of foreign interference in our elections. If reports are true and the president is interfering with that, he is again jeopardising our efforts to stop foreign meddling,” he tweeted.

Mr Trump confirmed to reporters on Thursday night as he landed in Las Vegas that he was considering several people for the permanent position, including Mr Collins, who, like Mr Grenell, has no intelligence experience.

The change of personnel is the latest signal of tensions between Mr Trump and the intelligence community, whom he has accused of unfairly opening an investigation into Russian interference in his 2016 election campaign.

Relations between the president and the department of justice are also strained. Mr Trump has defied a request by attorney general Bill Barr last week to stop tweeting about ongoing federal cases following his commentary about the Roger Stone case.

Stone, a long-time ally of Mr Trump, was sentenced to 40 months in prison on Thursday for crimes that were revealed in the process of the Russia investigation. Following the sentencing Mr Trump said he expected that Stone would be exonerated, though he had not yet made a decision on whether to pardon him.