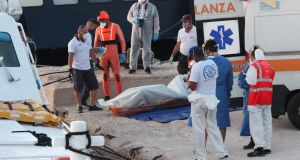 The body of a dead migrant wrapped in a blue bag is being put into an ambulance, after some 49 rescued migrants arrived at the commercial port of Lampedusa from the Coast Guard patrol boat CP-319 which transhipped rescued migrants from the civilian rescue boat Louise Michel 50 miles southeast of the Italian pelagic island. Photograph: Mauro Seminara/AFP

The UN refugee agency urged European nations on Saturday to let in hundreds of migrants rescued from the Mediterranean by humanitarian boats, including one financed by the British street artist Banksy.

The UNHCR and the International Organisation of Migration (IOM) said more than 200 rescued refugees and migrants needed immediately to get off the non-profit search-and-rescue ship Louise Michel, saying it was far beyond its safe capacity.

The plea from UNHCR and IOM also mentioned hundreds of migrants on two other charity ships in urgent need of safe harbour. The agencies said 27 migrants who left from Libya, including a pregnant woman and children, have been stranded on the commercial tanker Maersk Etienne for an unacceptable three-week period since their rescue on August 5th.

A further 200 rescued people on the SeaWatch4, which has waited for days to be allowed to enter a port, also needed urgent help, the agencies added.

The humanitarian imperative of saving lives should not be penalised or stigmatised, especially in the absence of dedicated state-led efforts, they said. They also reiterated concerns about the lack of dedicated EU-led search-and-rescue operations in the central Mediterranean, and the lack of co-ordination among European nations to support countries such as Italy and Malta, which are bearing the brunt of migrants arriving by sea.

Earlier on Saturday, the Italian coast guard answered a distress call from the Louise Michel, which was financed by Banksy, and took charge of 49 of the migrants who were most in need of help, it said.

The boat had become stranded at sea after the crew helped 130 migrants, with the ship’s leaders saying that requests for help from European authorities had been ignored.

The vessel, named after a French feminist anarchist, set off in secrecy on August 18th from the Spanish seaport of Burriana, near Valencia, and went to the central Mediterranean, where, on Thursday, it rescued 89 people including 14 women and four children. It had been safeguarding more than 200 people off Libya’s coast.

On Friday, the crew of European activists responded to a mayday call by Moonbird, an aircraft that monitors migrants’ boat in danger in the central Mediterranean, which had spotted a dinghy that was not moving and was taking in water.

“Louise Michel proceeded at full speed,” a ship spokesperson said. “We handed out life vests to 130 people to secure the situation.”

The rubber dinghy is in the Maltese search and rescue zone, dangerously overcrowded and taking in water, with several on board suffering from fuel burns and injuries, after having spent several days at sea. When the Louise Michel made contact, there was also a dead body on board the vessel, which the coast guard has now removed.

On Saturday, Banksy posted a short video on his personal Instagram account and accompanied by a comment: “Like most people who make it in the art world, I bought a yacht, to cruise the Med.

“It’s a French navy vessel we converted into a lifeboat because EU authorities deliberately ignore distress calls from ‘non-Europeans’.” The video ends with the words All Black Lives Matter.

The passengers had previously contacted the Alarm Phone, an emergency hotline assisting refugees at sea, and requested immediate rescue. Activists of Alarm Phone and Moonbird alerted European authorities to the boat in distress. The crew alleged that neither the Maltese nor the Italian authorities had reacted adequately.

The Louise Michel can safely accommodate a maximum of 120 passengers. The ship has transferred dozens of the most vulnerable migrants and deployed life rafts for the others as they await assistance.

The crew said on Twitter: “We are unable to safely move and nobody is coming to our aid. The people rescued have experienced extreme trauma. We need immediate assistance.”

Lea Reisner, head of operations for the Louise Michel, said: “The people have sat in a mix of salt water and fuel for days.” She accused European states of not doing their job, saying: “They deny responsibility while we are trying to keep everyone alive . . . We need immediate assistance.”

Neeske Beckmann, of the Moonbird, said: “We were shocked when we saw the rubber boat – it was incredibly overcrowded and people on board were trying to shuffle water out of the boat with their bare hands.

“We knew this was a grave emergency situation and decided to send out a mayday relay to all authorities and actors in the vicinity. Responsible European authorities failed to react to our distress call and only the Louise Michel responded to this serious distress case.”

Painted bright pink and displaying a Banksy artwork depicting a girl in a life vest holding a heart-shaped safety buoy, the Louise Michel sails under a German flag. The 31-metre motor yacht, formerly owned by French customs authorities, is smaller but considerably faster than other NGO rescue vessels.

So far in 2020, more than 500 refugees and migrants are known to have died in the Mediterranean sea, and the real number is estimated to be considerably higher.

On Wednesday, 45 people – including five children – died when the engine on their boat exploded off Libya, in the country’s deadliest shipwreck this year, the UN said. More than 19,500 migrants have survived the Mediterranean crossing along the central maritime route this year and reached Italy or Malta. – Guardian