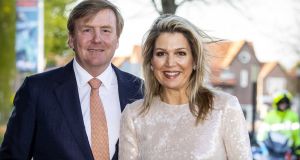 The Dutch royal couple, King Willem-Alexander and Queen Maxima, have apologised after a breach of social distancing was captured by a photographer during their summer holiday in Greece.

The couple were posing for a souvenir photograph with the owner of a restaurant they visited on the tiny island of Milos, in the Aegean Sea north of Crete, where they said they were caught up “in the spontaneity of the moment”.

The norm in Greek social distancing is 1.5 metres, but the photograph shows the royals and the restaurateur shoulder-to-shoulder – exactly as such a picture would have looked in the days before the Covid-19 pandemic.

In the picture, the king is carrying a rolled-up mask in his right hand, but none of the three is wearing a mask despite their close proximity to one another.

The laws regarding masks were tightened in Greece at the start of August in response to the biggest daily rise in confirmed new cases of coronavirus since the end of lockdown on May 4th.

However, while there is an understandable element of confusion among tourists, it seems that masks are mandatory in restaurants only for serving staff and not for customers.

One friend of the restaurant owner, who was contacted by Dutch media, said the restaurateur had told him the picture was for a private album – and that the breach of social distancing rules had been “a mistake”.

Then, in a tweet signed “WA & Maxima” on the Twitter feed of the royal household on Monday, they attempted to explain their lapse in judgment.

“A photo appeared in the media in which we didn’t keep the appropriate distance. Of course, we should have. Because keeping coronavirus rules while on holiday is just as essential if we’re to keep the virus under control.”

Although the word “apologise” was not actually mentioned, the tweet was generally taken by the Dutch public to have been an apology.

Most of more than 500 responses in the following 24 hours were positive. One asked if that was how they behaved “at the butcher’s or the supermarket”. Others claimed coronavirus was a hoax.

Willem-Alexander and Maxima have been on holiday with their daughters, Amalia (16), Alexia (15) and Ariane (13) at their home in Kranidi, overlooking the Aegean, where neighbours include Sean Connery.

Last week, paparazzi photographed them on board a new speedboat reputed to have cost €2 million.