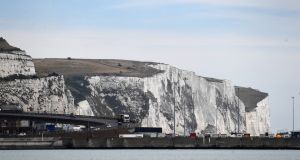 The cliffs of Dover in Kent. Britain and France have said they are trying to shut down the migrant route across the Channel. Photograph: Andy Rain/EPA

A 16-year-old Sudanese migrant has been found dead on a French beach after officials were told a makeshift boat had capsized at sea.

Another migrant, suffering from hypothermia, reported in the early hours of Wednesday that a companion who could not swim was missing and may still be in the water, France’s prefecture for the English Channel said.

At 8am, border police were informed of the discovery of a teenager’s body on the beach at Sangatte, just outside the port city of Calais.

The tragedy came as migrants making the perilous crossing of the English Channel in small boats have been a focus of the UK Government amid a record number of journeys.

Opposition MPs and charities criticised the Government’s handling of the situation and called for safe routes for asylum seekers to be provided.

British home secretary Priti Patel, who has pledged to make the route “unviable”, said the death was “an upsetting and tragic loss of a young life”.

“This horrendous incident serves as a brutal reminder of the abhorrent criminal gangs and people smugglers who exploit vulnerable people,” she added.

“Immense sadness: A 16-year-old Sudanese migrant who disappeared in the sea last night was found dead in the beach in Sangatte this morning,” she tweeted.

Local reports suggested the migrant was a male.

The French prefecture said the body was discovered on Wednesday morning during a huge search and rescue effort after they were notified at 1.09am that a migrant suffering from hypothermia had been found on the beach.

He was taken to hospital and told authorities he had been on a makeshift boat which had capsized.

He said his companion, who could not swim, might still be in the water.

Labour leader Sir Keir Starmer said: “The death of a 16-year-old child in the Channel is a tragedy. My thoughts are with his loved ones.

“This is a humanitarian crisis that needs a compassionate response.”

Shadow home secretary Nick Thomas-Symonds said the Government’s response to the situation “has been lacking in compassion and competence”.

“Ministers urgently need to step up work with international partners to find a humanitarian solution to this crisis, which is costing lives,” he added.

Migrant charity worker Bridget Chapman, of the Kent Refugee Action Network, said the death “was completely avoidable” as she criticised the Government’s “chaotic and callous” handling of the situation.

“The Government needs to step up to its humanitarian responsibility immediately and ensure safe and legal passage so that we avoid any more unnecessary deaths,” she said.

Clare Moseley, the founder of Care4Calais, which supports refugees around the French port, said the charity is “absolutely devastated by the unnecessary death”, adding: “We can only imagine the fear he felt and our hearts go out to his family.

“This young boy’s death starkly demonstrates the total failure of our Government to do anything to help these children who are in such desperate straits.

“Things need to change. We need a way for people’s asylum claims to be fairly heard without them having to risk their lives. We need this before someone else dies.”

“By closing safe routes to seek asylum we are pushing desperate people into dangerous situations with devastating consequences,” he said.

Prosecutors in nearby Boulogne-sur-Mer launched an investigation into the death.

Immigration minister Chris Philp, who has held talks in Paris over the boats, said: “We will redouble our work to agree and implement a new plan with France with the aim of completely stopping these boat crossings, which are facilitated by ruthless criminals and which risk lives.”

Dover MP Natalie Elphicke added: “This latest death in the Channel is both shocking and sad. It underlines that it is essential to bring an urgent end to these perilous small boat crossings.”

Dan O’Mahoney, the Home Office’s newly appointed clandestine Channel threat commander, is expected to return to France on Thursday to continue discussions with officials in Paris and Calais in a bid to tackle the crisis.

The death came as it emerged that Yarl’s Wood women’s immigration removal centre in Bedford is temporarily being used to house migrants following the increase in crossings.

The Home Office said the small number of women who were being held there have now been moved to other detention facilities but Yarl’s Wood could still be used for female detainees at short notice.

Meanwhile, in Dover, children were among more than 50 migrants who arrived on boats on Wednesday morning.

An RAF Shadow R1 plane is monitoring the Channel as part of continued assistance to the Home Office.

Urgent discussions between Kent County Council and the Government took place on Tuesday over where to house migrant children who travel to the UK without family.

It emerged earlier in the week that any new, unaccompanied asylum-seeking children would be left with Border Force after Kent County Council announced it had reached capacity.

More than 4,700 migrants have reached the UK by small boat this year, analysis by the PA news agency shows. – PA