Why are we forcing refugees to risk their lives crossing Channel? 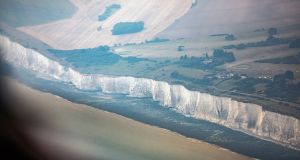 White Cliffs of Dover: crossing the Channel by boat is extremely dangerous for refugees. Photograph: Aeris Finney/British ministry of defence

Back in 2015, when I first began reporting from the "Jungle" refugee camp in Calais, I remember asking people there why they wouldn’t use a boat to get to England.

At the time, then British prime minister David Cameron had just decried migrants and refugees in Calais as “a swarm”, but those I met were men, women and children who had fled a myriad of horrors and often had compelling reasons for wanting to reach the UK. Each night, they would pace motorways and train tracks, trying to jump on trucks or moving carriages. They would risk the wrath of French police who beat and pepper-sprayed them in the face, or drove them an hour away from the coast, leaving them to walk back through the night and try again.

Some died in those attempts. Over the following year, I attended funerals and memorials for teenagers whose lives ended in Calais, watching relatives and countryfolk bewailing how unfair it was that they had no safe route to safety. One was a 15-year-old Afghan boy called Masud, who suffocated to death in a truck. Another was 17-year-old Houmed, from Eritrea, who fell into a deep hole while escaping from police.

But all of those I spoke to said crossing the Channel by boat was simply far too dangerous. It is one of the busiest shipping routes in the world. Many of the refugees and migrants who make it to Calais have already survived a traumatic sea journey, and almost everyone knew someone who had drowned.

More than 4,000 migrants and refugees have crossed the Channel by boat this year. That anyone is now using this route to reach the UK demonstrates how years of securitisation have blocked off other options. On Wednesday morning, a 16 year old was found on the beach of Sangatte after setting sail in a small dinghy with a shovel as a paddle, and it’s predictable that there will be more.

Hysterical political reactions and safari-like news broadcasting don’t get the public closer to understanding the context of what is happening. It makes it easy to forget that developing countries hold the vast majority of refugees (despite being one of the world’s poorest countries, Uganda, where I am now, hosts about 1.4 million and accepted 4,000 more from the Democratic Republic of the Congo in June alone).

In countries like Italy and Greece, systems are overburdened with new arrivals, and it is common to see refugees sleeping on the streets

Living in camps, or scraping by in cities with no social safety net, people who have fled wars or dictatorships still experience insecurity, poverty and exploitation. Many are hoping for a legal route to Europe or the US through refugee resettlement, but the number of spaces offered by rich countries is less than 5 per cent of what the UN says is urgently required. That means people have the choice to wait decades, their lives in limbo, or decide to reach a territory themselves where their asylum claim can be assessed and their right to protection under international law granted.

Only a small proportion of refugees manage to cross the Mediterranean Sea, and less than 2 per cent of those who make it to Europe have traditionally reached Calais. In countries like Italy and Greece, systems are overburdened with new arrivals, and it is common to see refugees sleeping on the streets.

Most of those I spoke to had understandable reasons for wanting to reach the UK. One man had a chronic disease and wanted to be cared for by his family, who lived in England. Others were appalled by the racism they had experienced in France, which included being called “monkeys”. Many came from countries that were long colonised and looted by Britain, meaning they spoke English fluently and felt they could build a future there, even if the UK was unwilling to recognise those historical ties.

All of them would have preferred legal routes, but knew this was almost impossible. Even when agreements are made to reunite families, the processes are slow and unreliable, and there’s a risk that policy will change before they’re completed. Someone recently described migration to me as being like a balloon: squeeze one section and another part expands – desperate people will always find another way.

This June, I spoke to a Sudanese man in Calais, who had been in touch with me since his time in north Africa. He had spent years between smugglers and detention centres in Libya, and survived a shipwreck in 2018. France had refused his asylum application without any real knowledge about what he had been through, he said, and security were constantly harassing him. In France, more than half of first-time asylum applications from Sudanese people are rejected. , and there is a risk of being deported back to Sudan. Still, the man seemed positive. “I’m going to try as much as I can to get to the UK. I’m going to get over this soon, and I’m going to live a decent life,” he said. Since then, his phone has been off and I don’t know what became of him.

Behind endless tragedies, there are still success stories – people who do eventually begin their lives again. On Tuesday, I received an unexpected message from a young man I interviewed in a refugee camp in northern France nearly five years ago. He said he had finally made it to the UK, and got medical care for his sick mother, who was on the journey with him. “The life here is amazing and it helps me gradually to live better than I had before,” he said.

And two weeks ago, an Eritrean, who made it to the UK in 2015 after months in Calais and years of suffering, sent me photos of his new baby. She was adorable, a tiny girl with piercing eyes who will hopefully never know what it is like to risk her life in a dangerous boat, simply because of the chance of her birthplace.

Sally Hayden writes for The Irish Times from Africa