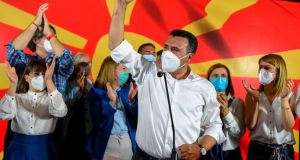 Projections of how North Macedonia’s 120-seat assembly will look after Wednesday’s election give the Social Democrats 46 seats and the right-wing VMRO-DPMNE party 44, with the Democratic Union for Integration (DUI) – the main representative of the country’s large ethnic Albanian minority – on 15 seats.

“The citizens went out and voted for a clear future, for unity and solidarity, for economic patriotism, for law and order and to choose a better present and a better future,” he added.

Mr Zaev’s cabinet resigned in January following the EU’s refusal to approve the start of accession talks with his country, even after it changed its name from “Macedonia” to end a bitter dispute with neighbouring Greece, which has a region with that name.

He will hope to lead a new government into membership talks that have now been given the green light and may start this year, marking another stage in North Macedonia’s integration with the West after it became Nato’s 30th member in March.

VMRO-DPMNE regards the name change as a national humiliation. While not explicitly threatening to tear up the deal, a nationalist-led government in North Macedonia could be expected to have more abrasive relations with Greece, Bulgaria and other neighbours.

Hristijan Mickoski, the leader of VMRO-DPMNE, praised his party’s election performance in the face of “harsh circumstances, tremendous pressure and numerous irregularities”, and said he was ready to discuss a coalition with ethnic Albanian parties.

Mr Zaev is likely to secure the first shot at forming a new government, however, and may look to former coalition partner the DUI to forge an alliance that would have a wafer-thin majority in parliament.

The DUI has been part of ruling alliances for most of the last two decades, but angered the Social Democrats and VMRO-DPMNE this year by campaigning for one of its members to become premier in the next coalition government.

Prime minister Oliver Spasovski, who has led a caretaker government since January, said “the people’s will must be turned into legitimate institutions as soon as possible . . . to cope with serious decisions due to the Covid-19 situation, but also because of the European integration process.”