Washington state wrestling with Covid-19 for a second time 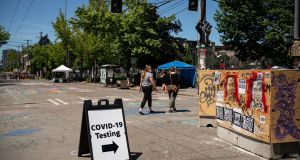 In what seems like almost a lifetime ago, America’s coronavirus story started in January in Washington state, with the nation’s first confirmed case followed by an early outbreak that spread with alarming ferocity.

But swift lockdown measures were credited with holding down illnesses and deaths. By June, nail salons and bars had begun to reopen, even as the virus began to rage in Texas, Arizona and Florida. Washington still had relatively low case numbers, and some counties were even contemplating a return to movie theatres and museums.

Now, those plans are on hold. The coronavirus is once again ravaging Washington, and the number of cases has hit grim new milestones. Since the middle of June, the state has reported an average of 700 new cases per day – the highest levels since the start of the pandemic. More than 42,000 people have been infected and over 1,400 have died.

“If these trends were to continue, we would have to prepare to go back to where we were in March,” state governor Jay Inslee said recently. Six months after the coronavirus first reached the United States, the state that was on the initial front line – a state that locked down early and hard – is only now beginning to see how complicated and lengthy the fight may be.

A lot of things are going wrong at once. Young people, less likely to die of the virus and undoubtedly weary of social distancing measures, have been driving a spike in new infections in the Seattle area. And an outbreak in Yakima County that began powering its way through agriculture workers in the spring has now spread widely through a community that has not embraced self-isolation and masking to the degree that many Seattleites have.

Yakima, the eighth-most populous county, now has the second-highest number of cases. While the county cannot be blamed for hot spots elsewhere, Yakima does show how the virus can simmer along at a seeming lull – until a fresh outbreak suddenly surges through an entire region, challenging officials to stitch together cohesive policies for a patchwork of different problems.

When the virus first came to Washington, the eastern part of the state was not hit as badly as Seattle, a liberal city with legions of tech workers who dutifully stayed home. But lockdown measures were not as effective in Yakima, a much less affluent county where more than 60 per cent of people work in meat- or fruit-packing plants or other essential jobs.

The county is home to a large Hispanic population, which officials have said is more at risk of the coronavirus because of crowded living conditions where the virus can easily spread or limited access to healthcare. Many people live pay cheque to pay cheque, and if they were able to get up and go to work, they do.

By mid-May, people who worked in Yakima’s fruit-packing facilities had started to get sick. Terrified of working on crowded assembly lines or in warehouses that were not regularly cleaned, many went on strike, even as the virus spread outside the buildings’ walls.

Cases hit a peak in early June, according to Dr Teresa Everson, the health officer for the Yakima Health District, just as more workers were cramming into processing facilities for the beginning of Washington’s busy cherry-picking season. Still, only a third of those in the county wore masks, according to one survey from health officials.

In the last few weeks, infectious people have gone to at least 20 family gatherings, 15 birthday parties, two baby showers and two weddings, Everson said. Some businesses were even reluctant to work with her office, which was trying to track cases and do contact tracing.

“There are a few large employers that persistently do not return our phone calls and do not want to work with us,” Everson said.

Angelina Lara, who packs fruit for Allan Brothers, was among the workers who got sick, and she still has not recovered her sense of taste and smell. She cannot enjoy cooking the recipes her children find for her on TikTok, but she is grateful that no one else in her home got as sick as she did. She knows at least one person who has died. He worked in a warehouse, too.

Lara was among the workers who went on strike, demanding more protections, including free masks, which Allan Brothers initially wanted to charge for, Lara said. (The company did not respond to a request for comment.) Sitting at a picnic table in Sarg Hubbard Park, Lara and three other workers described being hassled by the police during the protests.

Once, a man who was watching the demonstrations – a private citizen, they believed, who had come around before – drew a gun on them, one said.

Lara said she was dismayed that she had to fight for basic protections that some of her neighbours appeared to see as an infringement on their liberty. “What liberty?” Lara said, shaking her head.

Local law enforcement authorities have been reluctant to aggressively enforce virus-control measures ordered by the state. When the governor issued a statewide mask mandate, Yakima County’s sheriff, Robert Udell, issued a statement saying that he would not arrest or detain anyone who violated the “controversial” rule.

As in many conservative towns, masks are a political issue here, and rumours have swirled: the masks are bad for your health; officials are inflating the numbers. “Our county health department’s cooking the books,” a Yakima County sheriff’s detective, Judd Towell, said one recent afternoon at a dusty gun range in Yakima. He went on to argue, without evidence, that the severity of the outbreak was not what county health officials were making it out to be.

Everson said she has heard plenty of such suspicions. “We are accused daily of blatantly lying about our numbers to either scare the public or make money,” she said. “I don’t know what to make of that.”

Udell, who was stepping up to the range not far behind Towell, said that his wife had recovered from the virus and he did not share Towell’s theory. Still, when the outbreak moved to eastern Washington and the morgues in Yakima did not overflow, and the hospital did not run out of beds, Udell did not necessarily see a public health victory – he saw that people had been scared unnecessarily.

“At the beginning when the Covid started, there were these huge estimates of burning piles of bodies and all that kind of stuff, and it’s obvious the estimates have been way-high,” he said.

With only 60 deputies and one of the highest murder rates in the state, Udell argues that he has bigger problems to deal with than enforcing the mask mandate. And ultimately, Udell, an elected official, has no interest in wading into a debate over masks that could alienate voters.

“I get emails, dozens of emails a day, saying ‘I’m never going to do it, you can’t make me’,” he said. “On the other side, we get emails saying, ‘Put those people in jail.’” For health officials, there is no debate. The government can increase testing only so much, they say. But to reopen businesses, to re-establish a normal way of life, Washington will have to rely on a weary public that may have thought they had the virus beat.

Just a few weeks ago, the state was confident that it could reopen schools in autumn, allowing many parents to go back to work and fuel the state’s economic recovery. But amid mounting opposition from educators and health experts, those plans look increasingly unlikely. And on Tuesday, Inslee said that no counties would be allowed to loosen lockdown restrictions for at least two weeks.

In Seattle, still the heart of the state’s outbreak, many people are resigned to the precautions they envision for the foreseeable future. On July 4th, families wearing masks grilled tortillas, played on swings and enjoyed the parks – many feet away from anyone else. Salons took customers’ temperatures before letting them in. At Target, people lined up six feet apart at the cashier.

Inslee, in a recent interview, sounded hopeful. “Mask usage is changing very rapidly in my state,” he said. “What we’re asking people to do, they are doing.” – New York Times