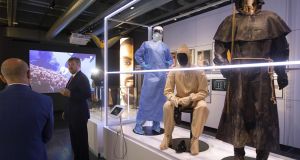 A new report by a UK university has revealed the cause of the Netherlands’s two worst concentrations of Covid-19 as the reaction of the infection with air pollution, primarily traffic fumes – a discovery with implications for the management of the disease worldwide.

Virologists have been struggling to understand why the provinces of Noord-Brabant and Limburg have been hardest-hit, and the experts from Birmingham University now say they have “compelling evidence” for the link between pollution and the lethal spread in the south of the country.

Mass testing began in the Netherlands on July 1st and the results have so far been encouraging, with just 1 per cent of 369,287 tests between then and July 12th proving positive. Even so, the higher number of deaths and infections in the south has been contentious in the absence of any logical explanation.

Noord-Brabant has had more deaths in hospital than any other province, accounting for about 25 per cent of the total, which stood at 6,135 on Tuesday. Limburg has had the highest infection and death rates per head of population, with 439 infections and 67 deaths per 100,000 inhabitants.

That national figure of 6,135 deaths does not, however, include fatalities at home or in nursing homes, which are expected to add some 40 per cent to the final count. Statistics are now published weekly rather than daily, and Tuesday’s showed 534 new infections, 16 hospital admissions and eight deaths.

As the lockdown continues to ease – with restaurants, cafes and schools re-opened and masks obligatory on public transport – prime minister Mark Rutte’s coalition will be relieved the problems in the south haven’t been traced to inadequate crisis management, despite claims to that effect.

The Birmingham team says fine dust particles – known as PM2.5 – from motor pollution, reacting with ammonia emissions from cattle farming, have been identified as the cause.

Remarkably, an increase of just one microgram of the dust particles per cubic metre in the environment can result in a dramatic increase of between 13 and 21 per cent in Covid-19 deaths.

The concentration of the dust particles in Noord-Brabant and Limburg was already high, at around 12 micrograms per cubic metre – compared to roughly eight micrograms in more remote northern provinces.

As a result of those findings, the Birmingham researchers analysed data from all 355 Dutch municipalities and found that numbers of hospital admissions and deaths confirmed the clear relationship between air pollution and an increase in fatalities.

The interaction of the pollution with ammonia emissions will also be a concern for the Dutch government, which is locked in a row with protesting farmers over measures to reduce environmentally harmful emissions.

As the Netherlands prepares for stay-at-home summer holidays, the number unemployed rose by 74,000 in June to 404,000, 4.3 per cent of the national workforce, a level not seen since 2017, according to the national statistics agency.

Young people are being hit hardest, with the number of jobless 15-25 year-olds rising from 9.5 to 10.7 per cent – increasing fears of a “lost coronavirus generation”.