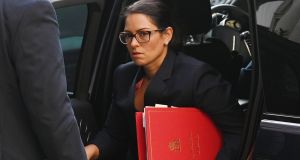 Britain’s home secretary Priti Patel: ‘I am sorry that my behaviour in the past has upset people.’

Sir Alex found that Ms Patel was “action oriented and can be direct” and that she became frustrated by a lack of responsiveness and support from senior figures in the Home Office and before that at the Department for International Trade.

“The evidence is that this has manifested itself in forceful expression, including some occasions of shouting and swearing. This may not be done intentionally to cause upset, but that has been the effect on some individuals,” his report said.

“The definition of bullying adopted by the Civil Service accepts that legitimate, reasonable and constructive criticism of a worker’s performance will not amount to bullying. It defines bullying as intimidating or insulting behaviour that makes an individual feel uncomfortable, frightened, less respected or put down. Instances of the behaviour reported to the Cabinet Office would meet such a definition.”

Downing Street said Mr Johnson had “respectfully reached a different conclusion” from Sir Alex and decided that Ms Patel’s actions had not been in breach of the ministerial code. He expressed full confidence in her as home secretary. Ms Patel issued an apology, acknowledging that her behaviour had caused upset.

“I am sorry that my behaviour in the past has upset people. It has never been my intention to cause upset to anyone. I am very grateful for the hard work of thousands of civil servants who help to deliver the government’s agenda. I care deeply about delivering on the commitments we have made to the people of this country and I acknowledge that I am direct and have at times got frustrated,” she said.

An inquiry into Ms Patel’s behaviour was launched last March after the resignation of Philip Rutnam, the top civil servant at the Home Office, who claimed that she had created fear among her staff. The report was completed in the summer and has been on the prime minister’s desk since September.

Sir Alex’s report said that Ms Patel’s bullying may have been “unintentional” and that senior civil servants had been insufficiently supportive and had failed to give her feedback about the impact of her behaviour. Sir Alex said on Friday that although it was ultimately up to Mr Johnson to decide if Ms Patel had breached the ministerial code, he could not continue as the prime minister’s independent adviser on the code.

Labour leader Keir Starmer said that if he were prime minister, he would have removed Ms Patel from her position as home secretary.

“It is hard to imagine another workplace in the UK where this behaviour would be condoned by those at the top. The government should be setting an example. Instead, it is one rule for Boris Johnson and his friends, another for everyone else. The prime minister has previously said he ‘loathes bullying’. Yet when one of his own ministers is found to have bullied their staff he ignores the damning report sat on his desk and instead protects them,” he said.