Country in crisis over government refusal to sanction regional election

Hundreds of refugees arrive daily from neighbouring Ethiopia into the Um Rakuba camp in the Sudanese border town of Qadarif where the United Nations are registering the families. Video: Reuters 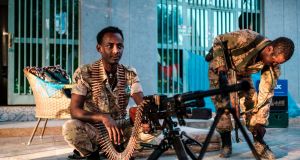 A member of the Amhara Special Forces next to a machine gun at an improvised camp in the front of a shop in Humera, Ethiopia: In October, when the central government cut its funding, the Tigray’s leadership said it was akin to a “declaration of war”. Photograph: Eduardo Soteras/AFP

Driving through central Addis Ababa last month, my driver scowled as his small taxi passed under a giant poster of Ethiopia’s prime minister and Nobel laureate, Abiy Ahmed. It wasn’t the first time I’d seen that reaction. I spent all of October in Ethiopia. Abiy’s face is everywhere – on posters in the street, in framed photos on the walls of businesses – but the only person I met who said they were happy with his leadership was a 14-year-old schoolboy, excited about a new park the prime minister had opened in the city.

Days after I left the country, war would be declared, but even in October, the atmosphere was tense. Checkpoints were dotted along roads and vehicles were searched repeatedly by police and soldiers, both inside Addis Ababa and further north, in the Amhara Region. Colleagues told me they thought the searches were for either weapons or money, as the currency had recently been changed.

Speaking to Ethiopians, I heard many complaints about ethnic tensions increasing. Whether correctly or not, many accused Abiy of fuelling them. They would laugh cynically when I mentioned his Nobel Peace Prize, awarded last year, predominantly for his efforts to reach a peace agreement with neighbouring Eritrea.

Abiy’s leadership began in April 2018. It was a breath of fresh air in a country that had been led by successive regimes which crushed dissent. Shortly after he took over, the Ethiopian embassy in London invited me to a press freedom event they were holding: notable from a country that had heavily controlled what journalists could report on in preceding years.

This effort contrasts starkly with the past week. Ethiopia has arrested local reporters and issued warnings or revoked the licences of journalists from various international media organisations, while an analyst for the International Crisis Group was deported.

In a statement announcing Abiy’s win last year, the Nobel Prize committee said much work in Ethiopia remained to be done, but he “has initiated important reforms that give many citizens hope for a better life and a brighter future”. Despite recognising there were still ethnic tensions across the country, the committee said Abiy’s efforts “deserve recognition and need encouragement”.

These tensions were particularly strong when it came to the northern region of Tigray, which is run by the Tigray People’s Liberation Front (TPLF).

After Ethiopia’s national elections, which were supposed to be held in August, were postponed a year due to the coronavirus pandemic, the region held its own. The central government decried this as illegal, exacerbating disquiet among the TPLF, which had spent decades ruling the country before Abiy came to power.

In October, the central government cut its funding, something Tigray’s leadership said was akin to a “declaration of war”.

The announcement of Ethiopia’s military operation on November 4th, days after I left, still came as a surprise.

Ethiopia’s federal government said the offensive – which it calls a “law enforcement action” – was a response to attacks on its own troops.

The conflict quickly turned into an information war, helped by the government cutting telecommunications – including phone calls and the internet – from Tigray, which has a population of roughly five million people.

Aid organisations cannot get access. During an interview last week, a UN spokeswoman told me they had not been able to speak to their own staff inside Tigray in two days.

Across the rest of Ethiopia, and the world, people with friends and relatives in Tigray are grappling to find out what is happening to their loved ones.

All indications are that this is turning into a massive humanitarian crisis, which risks destabilising Africa’s second most populous country, as well as the countries around it, including neighbouring Sudan – still in a fragile state following the ousting of long-reigning dictator Omar al-Bashir.

Tens of thousands of Ethiopians have already fled to Sudan; aid workers describe families arriving with nothing, badly traumatised, desperate for food and sleeping in the streets.

Neighbouring Eritrea too is back at war: this time aligned with Ethiopia against Tigray. Decommissioned soldiers are being called up to fight again, and civilians forced to mobilise to feed and otherwise assist the army, according to Eritreans I have spoken with.

In the coming days, things look likely to escalate. Last weekend, military spokesman Col Dejene Tsegaye appeared on state-run TV saying civilians in Tigray’s capital Mekelle should “save themselves from any artillery attacks and free yourselves from the junta” or there will be “no mercy”.

“The junta is now shielding itself within the public and the public must say to them ‘don’t get me killed’,” Tsegaye said, referring to the TPLF leadership.

On Sunday, Abiy followed up, tweeting a statement which said the military operation was in its “third and final phases”, and civilians need to play a “key role” by standing with the Ethiopian army.

The city, which has a population of half a million people, was given until Wednesday to surrender. In response, TPLF leader Debretsion Gebremichael has said his people are “ready to die in defence of our right to administer our region”.