Temporary internal truce that united Democrats prior to election now over 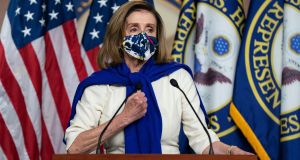 Nancy Pelosi: the Democrats have reappointed her as speaker of the House of Representatives. Behind her, the finger pointing has already begun however after disappointing congressional results. Photograph: Jim Lo Scalzo/EPA

The Democrats’ decision to appoint Nancy Pelosi as the next speaker of the House of Representatives this week was not surprising. But the real contest comes in January.

Pelosi was reappointed by her caucus for a fourth term through a virtual ballot on Wednesday, but the full House will vote on her nomination on January 3rd when the 117th Congress meets. She will need to secure a simple majority – 218 votes – to be sworn-in as speaker. While a handful of election races have not yet been called, so far Democrats have won 222 of the 435-member House. The tight margin means that she can afford few defections.

As both political parties take stock of their performance in this month’s election, it is clear that this was not a good election for Pelosi.

The inimitable House speaker, who spearheaded the “blue wave” that flipped the House in the 2018 midterm elections, now faces having a much-reduced majority. Despite her confident prediction on election day that the Democrats would expand their majority, several members lost seats, while the party failed to pick-up wins in states such as Texas and North Carolina as hoped.

Pelosi brushed off questions about this disappointing performance at a press conference this week, instead highlighting the fact that there will be a Democratic president in the White House, and talking up party “unity.”

But behind the scenes, the finger-pointing has already begun.

In a three-hour conference call last week, details of which were leaked, Democrats unloaded on each other. In particular, members who represent more moderate, swing districts, accused left-wing Democrats of sabotaging the election for others by leaving them vulnerable to Republican attacks.

“We need to not ever use the word ‘socialist’ or ‘socialism’ ever again,” declared Abigail Spanberger, who represents a Virginia district north of Richmond. “We lost good members because of that.” She also claimed that calls to defund the police had scared off voters, even though most Democrats had distanced themselves from that position.

More liberal members, including the four congresswomen collectively known as “the squad” who are unapologetically left-wing, shot back. Arguing that the liberal base turned out on election day, Rashida Tlaib of Michigan said the party should not just pander to white suburban voters.

The rancour has continued since the conference call. Alexandria Ocasio-Cortez, one of the progressive wing’s best-known figures, singled-out Conor Lamb in particular. The two young Congress members represent not only the competing ideological wings of the party, but the different electoral realities facing Democrats. While Ocasio-Cortez represents a liberal, and ethnically-diverse district of New York, 36-year-old Lamb has to appeal to more conservative, centrist voters in western Pennsylvania where Donald Trump is popular.

Ocasio-Cortez accused her colleague of running an outdated campaign, stating he had spent only $2,000 on Facebook advertising. Lamb hit back, criticising her for tweeting about fracking during the presidential debate, which he said damaged Democrats’ chances in Pennsylvania. “That’s not being anything like a team player,’ he told the New York Times.

It is evident that the temporary internal truce that united Democrats in the shared aim of defeating Donald Trump has come to an abrupt end.

Of course, internecine warfare has long been a feature of Democratic politics. In his new memoir, Barack Obama opens a chapter on his presidential campaign with the words: “Entering the summer of 2008, our campaign’s first order of business was unifying the Democratic Party. ”

But the party’s poor performance in the congressional elections has revived questions that surfaced in early 2018 about Pelosi’s leadership. This week, the speaker suggested her next term as speaker will be her last, stating she would “abide by” a previous plan, subsequently abandoned, for term limits to be imposed. Aged 80, Pelosi is the oldest ever speaker of the House. The other top positions are held by 81-year-old Steny Hoyer and Jim Clyburn, who is 80.

Senate minority leader Chuck Schumer also faced angry questions from his caucus this week, after Democrats failed to flip several targeted Senate seats. A member of Congress for 40 years, he could face a challenge for his Senate seat from Ocasio-Cortez in 2022. Money poured in to her election campaign this year, a sign that she could mount a well-funded primary challenge.

The force of generational change is one of many dynamics the Democratic Party will have to juggle as it prepares to assume the presidency. Joe Biden, who turned 78 this week, will be the oldest US president in history. But the younger generation will be biting at his heels.