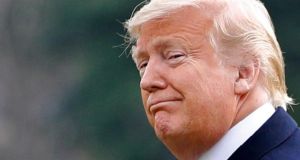 President Donald Trump: With a two-thirds majority needed for conviction, he is likely to be acquitted due to Republican control of the chamber. Photograph: Patrick Semansky/AP

House Democrats focused on the specific articles of impeachment against President Donald Trump as they entered the second day of their opening arguments in the impeachment trial of the president.

Addressing the 100 members of the Senate, House judiciary chairman Jerry Nadler – one of seven House impeachment mangers presenting the case against Mr Trump over his dealings with Ukraine – said that the president’s actions were “wrong, illegal and dangerous” and “capture the worst fears of our founders and the framers of our constitution”.

Focusing on the concept of abuse of power – the first article of impeachment against Mr Trump – Mr Nadler said that “no president has ever used his office to compel a foreign nation to help him cheat in our elections”. He continued: “Prior presidents would be shocked by the conduct and rightly so,” arguing that Mr Trump “sees no limits on his power, or his ability to use his public office for private gain”.

He also took issue with an argument from Republicans that Mr Trump had committed no crime and hence should not have been impeached. Noting that the section of the constitution dealing with impeachment uses the phrase “high crimes”, he pointed out this specifically means crimes against the state.

The Democrats & Shifty Schiff, whose presentation to the Senate was loaded with lies and misrepresentations, are refusing to state that the Obama Administration withheld aid from many countries including Ukraine, Pakistan, Philippines, Egypt, Honduras, & Mexico. Witch Hunt!

He also raised specific examples from constitutional history which showed that impeachable offences are not necessarily crimes, and that individuals can be impeached for non-criminal conduct. In the case of Richard Nixon, for example, he said that the House Judiciary Committee passed three articles of impeachment against the president. “Each of them encompassed many acts that did not involve federal law,” he said. “ Impeachment is not a punishment for crimes,” he said.

House Democrat Sylvia Garcia set out in detail how Mr Trump engaged in his activities towards Ukraine “with corrupt intent”, as he aimed to secure foreign help to aid his re-election campaign in 2020 by seeking damaging information about his political rival, Joe Biden, who is running for the Democratic nomination.

Democrats are seeking to make the case that Mr Trump is guilty of abuse of power and obstruction of Congress over his dealings with Ukraine. The impeachment process focuses on discussions the president had with Ukrainian president Volodymyr Zelenskiy and efforts by Mr Trump’s personal lawyer, Rudy Giuliani, and others to pressurise Ukraine to open an investigation into Mr Biden and his son, who served on the board of a Ukrainian company while his father was vice-president.

‘Truth on your side’

With a two-third majority needed for conviction, Mr Trump is likely to be acquitted given Republicans’ control of the chamber. But Democrats are hoping that some Republicans might vote later in the trial to summons witnesses, as only a simple majority is needed to agree those rules.

Mr Trump, who departed for Miami to attend a Republican fundraiser on Thursday evening, tweeted his disdain for the process throughout the day, claiming the Democratic process was “loaded with lies and misrepresentations” and describing his impeachment as a “witch hunt!”