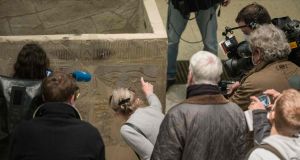 Friederike Seyfried, director of the Egyptian collection of the Neues Museum in Berlin, points to the damage caused to exhibits. Photograph: Stefanie Loos/AFP via Getty Images

Berlin police have no motive for post-war Germany’s worst case of art vandalism that has left dozens of works damaged in the capital’s Museum Island complex.

Speculation is growing that the attacks may be linked to a German spin-off of the baseless US “Pizzagate” conspiracy theory, this time involving the famous Pergamon Altar and the Book of Revelations.

The attacks on 63 pieces took place two weeks ago in three museums, including the Pergamon Museum, and saw Egyptian sarcophagi, stone sculptures and 19th century paintings sprayed with an oily liquid that has left visible stains.

“We feel very attacked,” said Dr Friederike Seyfried, head of the Egyptian collection, at a press conference on Wednesday.

Police say the attacks took place on October 3rd, the 30th anniversary of German unification in 1990, but are undecided on whether the date was chosen deliberately.

They are contacting about 3,000 people who visited the museum that day, seeking clues that might help in their investigation.

Police sources say they have no concrete clue to the identity of the vandal or vandals, but that the series of attacks in the sprawling museum complex would have taken an individual hours to carry out without accomplices.

Berlin police spokesman Carsten Pohl said the choice of objects vandalised appeared random and that a special team was “investigating in all directions”.

The Museum Island complex in central Berlin attracts more than three million visitors a year and was declared a Unesco World Cultural Heritage Site in 1999. Among its cultural treasures are a bust of the Egyptian queen Nefertiti and the second century BC Pergamon Altar from a vanished metropolis in the west of today’s Turkey.

One theory around the attacks has linked them to the altar, which is closed to the public until 2023 while the museum is being renovated. Attila Hildmann, a vegan chef turned Covid-19 conspiracy theorist, has claimed several times online that the Pergamon Altar is “Satan’s throne”.

Mr Hildmann and other conspiracy theorists, retooling the Pizzagate conspiracy that linked high-ranking Democrats to a child-sex ring during the 2016 US election campaign, draw on a reference in the Book of Revelations to the “angel of the church of Pergamon” and the city as being “where Satan dwells”.

The massive structure of steps, pillars and antique friezes was, Mr Hildmann suggested, a meeting point for a “global satanist scene and Corona criminals”.

“This is where they carry out their human sacrifices and abuse children,” he claimed, noting that the “satanist” Angela Merkel lives opposite the museum.

Already the attack has raised questions about security measures in the Museum Island complex, where few of the exhibition rooms have security cameras.

In March 2017 a giant gold coin worth €3.3 million vanished without trace from the island’s Bode Museum. Last February, three members of a leading criminal clan were handed jail sentences for the theft of the 100kg coin, which remains missing.

With the assistance of a museum staff member, thieves entered the museum through a staff room window that was not linked to the alarm system.