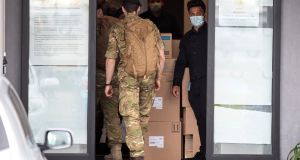 Military personnel enter the Sudima hotel in Christchurch, New Zealand, where the fishing crews are in quarantine. Photograph: Mark Baker/AP

New Zealand has recorded 25 new cases of coronavirus, the biggest daily toll the country has reported since the height of its initial outbreak in March and April.

Two were local cases and the rest were discovered at the border, including 18 infections among Russian and Ukrainian fishing crews who had arrived on a charter flight from Moscow days earlier.

The two new community cases reported on Wednesday were contacts of a ports worker whose case was reported on Sunday. It had been the first instance of community transmission in New Zealand since September 25th.

Wednesday’s figures underscored the pressure placed on border management systems to contain the virus in a country where daily life has largely returned to normal.

Ashley Bloomfield, the director general of health, said: “Putting our cases today in perspective, yesterday Spain announced around 48,000 new cases, and that would be the equivalent in New Zealand of around 4,000 new cases [by population size].

“We are not being complacent at the border and all New Zealanders need to make sure they are not complacent in the community.”

A total of 235 fishing crew had arrived from Moscow on a flight chartered by a seafood company, health officials in New Zealand said, with a layover in Singapore during which they stayed on the plane. It was the first of two scheduled flights of fishing workers due to arrive in New Zealand from Russia – which has the world’s fourth highest number of Covid-19 cases.

New Zealand, by contrast, has recorded one of the world’s lowest death tolls – 25 people have died – and fewer than 2,000 confirmed cases of the virus. Its success has been attributed to one of the world’s strictest lockdowns in March and April. All domestic restrictions on the country have since been lifted.

Now, border controls are what is standing between the isolated south Pacific island nation and the pandemic. Only New Zealanders and their families are permitted to enter the country and must spend two weeks in quarantine, during which they are tested twice for the virus.

Exemptions are allowing essential workers to cross the border – the Russian and Ukraine fishing crews among them. The workers were required to self-isolate for 14 days before they left Moscow, New Zealand’s top health official said on Monday, and had all been tested before they left. The crews are staying at quarantine facilities in the Sudima hotel in Christchurch.

Two people were barred from boarding the flight after testing positive, Mr Bloomfield said. The other infections were picked up during an extra round of testing in Christchurch, New Zealand, where they were in government-run quarantine.

“The fact that we’ve found these infections is absolutely the system working,” Mr Bloomfield said.

The crews were the only people staying at the hotel where they were quarantined, Mr Bloomfield added. People working at the airport when the travellers arrived, and those driving the bus they were on, will be tested for the virus.

Michael Baker, an epidemiologist at the University of Otago, said extra restrictions should be imposed on arrivals from countries where Covid-19 numbers were high. Russia has recorded 1.4m cases and 25,000 deaths.

“We could if we found, in those source countries, that they were consistently not performing well, that we might not accept travellers from those countries,” he said.

There are 56 active cases of Covid-19 in New Zealand, 53 of them in the government-run isolation facilities. – Guardian