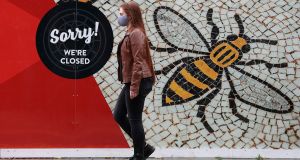 Boris Johnson will impose the highest level of lockdown on 2.8 million people in Greater Manchester after talks with local leaders about financial support failed to reach agreement. The prime minister said the Tier 3 measures were necessary because of rising coronavirus infections in the area, including among people over 60.

But Greater Manchester mayor Andy Burnham accused the government of playing poker with people’s lives after ministers refused to bridge the gap between their offer of £60 million in support and local leaders’ demand for £65 million.

“In summary, at no point today were we offered enough to protect the poorest people in our communities through the punishing reality of the winter to come. Even now I am still willing to do a deal but it cannot be on the terms that the government offered today.”

Accusing the Conservative government, which promised in December’s general election to level up the country’s poorer regions, of “a deliberate act of levelling down”, Mr Burnham said after the announcement of Tier 3 restrictions that Manchester should receive the £60 million he was offered. But Mr Johnson told a press conference in Downing Street that the region would only receive £22 million in funding to support it during the restrictions.

“We will work with local authorities, including Greater Manchester, to allocate testing and introduce local contact tracing,” he said.

“Over the last 10 days we’ve tried to get an approach with local leaders in Greater Manchester. Unfortunately agreement wasn’t reached. I do regret this as it would have been better, and we would have a better chance of defeating the virus if we work together.”

The government’s scientific advisory group (Sage) proposed a time-limited national lockdown last month, but deputy chief medical officer Jonathan Van-Tam said at the Downing Street press conference that now was not the time for such a move.

“In areas where it is out of control, hard measures are needed,” he said. “But do I think right now it is appropriate to insist on those similar hard measures in, for example, the southwest of England or Kent, where levels of the disease are very, very much lower than in the north of England – the national fire-break you talked about? No, I don’t think that is right.”

Labour leader Keir Starmer, who has called for a national lockdown lasting two or three weeks, offered his support to Mr Burnham, a former Labour minister.

“The collapse of these talks is a sign of government failure. The Conservatives have been treating local communities, particularly in the midlands, northwest and northeast, and their leaders with contempt,” he said.

“Labour recognise the need for stricter public health restrictions. However, that must be accompanied by extra financial support.”