More than 20,000 people detained in brutal crackdown on demonstrators 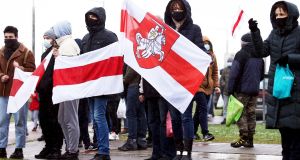 Opposition supporters hold former flags of Belarus as they gather to protest against police violence and the Belarus presidential election results in Minsk. Photograph: Stringer / AFP via Getty 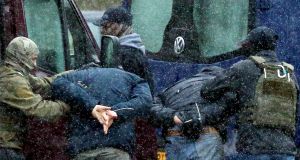 Thousands of Belarusians rallied again to demand the immediate resignation of the country’s president, Alexander Lukashenko, as opposition leaders dismissed his pledge to step down after constitutional reforms as a delaying tactic.

The veteran autocrat has weathered the biggest protests of his 26-year rule since claiming to have won a presidential election in August that opponents and western powers say was massively rigged.

Several people have been killed, hundreds hurt and more than 20,000 people detained in an often-brutal crackdown on demonstrators, who have continued to march despite facing police use of tear gas, water cannon and stun grenades, and the threat of dismissal from work and expulsion from schools and colleges.

On the 16th consecutive Sunday of protests, people gathered in smaller groups in many different districts around the capital, Minsk, and other Belarusian cities, in a bid to stretch police resources and avert the kind of violent mass detentions seen over many recent weekends.

Nevertheless, by late afternoon about 250 people taking part in the so-called “march of neighbours” had been detained in Minsk, according to the city’s police.

Mr Lukashenko claims his opponents are “puppets” of western powers that want to oust him and so weaken Russia’s strong influence in Belarus.

Unlike the European Union and United States, Moscow continues to recognise him as the legitimate president of Belarus and has promised him financial and security support while denouncing western “meddling” in the country of 9.5 million.

Under pressure from the protests, Mr Lukashenko proposed constitutional changes to move powers from the president to parliament, in what appeared to be a bid to take momentum from the opposition movement and allow him to remain in office during a consultation process that could take years.

Russia has also publicly backed constitutional change as a way to end the crisis. Analysts say a drawn-out period of reform would remove the appearance of Mr Lukashenko being ousted by street protests, which the Kremlin abhors, and allow Moscow to manoeuvre an acceptable successor into place.

“I’m in favour of a new constitution. Not because we need some kind of democracy – it’s not about democracy – but the situation that worries me is handing this [current] type of constitution to an unknown president. It would be bad,” Mr Lukashenko said during a visit to a Minsk hospital on Friday, noting how much power the head of state now wields.

Mr Lukashenko failed to give any indication of when he would step down, however, prompting opposition leaders to accuse him of cynically continuing to play for time.

”The people will never forget this nightmare and this confrontation. Its battle will continue until the leadership listens to us,” opposition leader Maria Kolesnikova told Germany’s Der Spiegel from jail in Belarus. “The regime has crossed all limits...It is an absolute evil that must be stopped.”