Angst hits 25-year low in Germany, the country that invented it 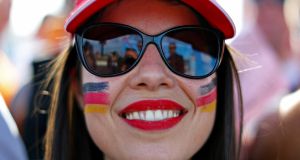 Smile like you mean it: Germany’s Angst Index dropped from 47 to 39 per cent. Photograph: Mark Thompson/Getty

Germany without angst is like imagining Ireland without drink. Angst – the German word for fear, anxiety and trepidation – is so ever-present in German culture that, aided by philosophers such as Martin Heidegger, it made the leap into the English language.

And yet we may have to rethink how we view the Germans after a new study suggested they are less fearful than at any time in the last 25 years.

Although the economy is wobbly and the far-right is rising in Germany’s east, the R&V Insurance Company’s annual “angst survey” suggests that the national mood is good – and getting better.

Germans haven’t been this sunny, the report suggests, since Riverdance debuted at Dublin’s Eurovision Song Contest.

“The Angst Index – the average of all angst criteria surveyed – dropped from 47 to 39 per cent after a retreat in nearly all worries, reaching the lowest level since 1994,” said Brigitte Rämstedt of R&V, presenting the numbers.

The top two worries – of 56 and 55 per cent of respondents – are about the potentially negative effect of refugees and foreigners on German social order and state stability.

Germans are just as worried by the effect of Donald Trump’s politics on world peace, while 47 per cent are worried about excessive demands on politicians and about political extremism.

Some 45 per cent of those quizzed are fearful about the cost of living in Germany, now and in their old age.

Finally, 41 per cent are worried about climate change, with women more concerned than men. Despite the popularity of the Fridays for Future campaign in German schools, just 35 per cent of young people aged 14-19 are concerned about the climate – the least-worried group.

Nearly 30 years after the Berlin Wall fell, German division is still visible, with eastern Germans up to 14 points more anxious than their western cousins.

Prof Manfred Schmidt, a Heidelberg-based political scientist and adviser on the report, said German terrorism fears – after attacks in previous years – had dissipated.

“If things remain relatively peaceful, as last year, the angst diminishes,” he said.

Curiously for the people who gave us the word Zukunftsangst – fear of the future – the UK’s looming departure from the EU is not among Germans’ top 20 worries.

As Dublin pursues a new strategic, post-Brexit relationship with Berlin, this may be an example worth following. Because German angst, it appears, is not what it used to be.