Boris Johnson criticised for using police as backdrop to speech

British prime minister Boris Johnson stumbles through an attempt to recite a police caution as he delivers a speech in front of lines of new police recruits in West Yorkshire. 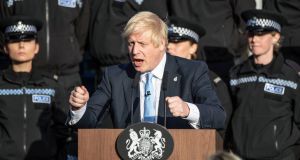 The Chief Constable of West Yorkshire Police has said he was “disappointed” to see his officers used as a “backdrop” to a political speech by Boris Johnson on Brexit and Jeremy Corbyn.

John Robins said on Friday that the force had agreed to its officers being used on the “understanding” that it would be in connection with the Government’s police recruitment drive and had “no prior knowledge” that the speech would veer into politics.

The prime minister has faced widespread condemnation for using lines of student officers as part of a “political stunt” criticising the Labour leader and referencing the general election Mr Johnson has failed to trigger.

Some 35 officers were positioned behind his lectern for at least 20 minutes before the speech at West Yorkshire Police’s operations and training complex began, and during the address one became unwell.

In a statement on Friday, Mr Robins said: “It was the understanding of West Yorkshire Police that any involvement of our officers was solely about police officer recruitment. We had no prior knowledge that the speech would be broadened to other issues until it was delivered.”

He said that, “minutes before the speech”, he was told that a scheduled visit to an National Police Air Service base had been cancelled, as well as a briefing to a pool of journalists.

“I was therefore disappointed to see my police officers as a backdrop to the part of the speech that was not related to recruitment,” Mr Robins continued.

Shortly before Mr Robins’ statement was released, Downing Street was defending Thursday’s visit to the police facility in Wakefield.

“The PM’s long-planned visit was highlighting a national recruitment campaign for 20,000 new officers which has been welcomed across the police service,” a Number 10 spokeswoman said.

“It gave the PM yesterday an opportunity to see first-hand the outstanding training which new recruits receive and to meet those who have committed their lives to keeping us safe.”

However, shadow policing minister Louise Haigh was among those demanding an apology, adding: “Boris Johnson cannot even be honest with a chief constable.”

“The prime minister and his aides deceived the police by knowingly using officers for a naked party political stunt, without their prior knowledge,” she said.

“This is a serious breach of trust and the Prime Minister should be ashamed of putting serving officers in this intolerable position. He should apologise to them immediately.”

Police Federation of England and Wales chairman John Apter said he was “surprised” at the use of the officers in a political speech.

He said it was the “wrong decision” and that it was “disappointing” to see the focus taken away from the recruitment of 20,000 officers.

Around 35 officers had been standing behind his lectern, in front of an old-style police box, for at least 20 minutes before the speech at West Yorkshire Police’s operations and training complex in Wakefield began.

Mr Johnson had finished his speech and had answered a number of questions from journalists seated behind the officers in the audience, when it became clear a policewoman standing behind his right shoulder was not feeling well.

He turned to ask the officer if she was OK and she sat down behind him.

Despite saying: “I’m so sorry, OK that is a signal for me actively to wind up”, he continued to criticise the Labour leader for not backing his plans for a snap general election.

The officer then stood up minutes later as Mr Johnson finished his speech.

Mr Burns-Williamson told the PA news agency: “To use police officers as the backdrop to what became a political speech was inappropriate and they shouldn’t have been put in that position.

“It clearly turned into a rant about Brexit, the Opposition and a potential general election. There’s no way that police officers should’ve formed the backdrop to a speech of that nature.”

Asked if Mr Johnson should apologise, he said: “Yes, because he’s used the pretence of an announcement around police recruitment for mainly a political speech.”

Mr Burns-Williamson said he had expressed his concerns to the Chief Constable of West Yorkshire Police and asked for an explanation around what happened.