British prime minister Boris Johnson has been accused of "playing games" in parliament by a member of the public - who spoke with an Irish accent - while walking on the street in Leeds. Video: BBC/Reuters 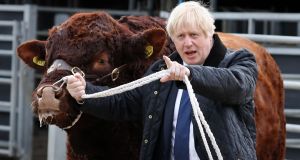 Britain’s prime minister Boris Johnson with a bull during a visit to Darnford Farm near Aberdeen, Scotland. Photograph: Andrew MilliganAFP/Getty 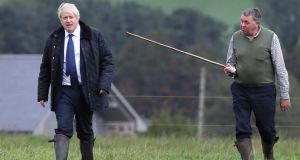 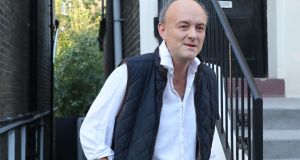 Dominic Cummings outside his home in London, on Thursday. Photograph: Isabel Infantes/AFP/Getty

Labour, the Scottish National party, Liberal Democrats and Plaid Cymru and the Independent Group emerged from a meeting on Friday vowing to vote against Mr Johnson’s second attempt, scheduled for Monday, to force an election.

They believe they should only agree to a snap election once Mr Johnson has been forced to take a no-deal Brexit off the table.

They have also shifted away from the idea of moving a motion of no confidence in the prime minister on Monday, which could trigger an election later in October, according to two people familiar with the private conversation.

Emily Thornberry, shadow foreign secretary, earlier said a no-deal exit had to be excluded before an election took place. “This crisis has to be sorted before we do anything else,” she told the BBC’s Today programme. “Let’s deal with the immediate crisis first, then have an election.”

Ms Thornberry said the prime minister was “a manifest liar” who could not be trusted not to use the device of an early general election to try to bounce the country out of the EU without a deal on October 31st.

On Friday the House of Lords concluded its scrutiny of emergency legislation intended to block a no-deal Brexit. The measure, which would require the prime minister to seek a delay if there was no deal on the table, is now expected to become law on Monday.

Mr Corbyn and SNP Westminster leader Ian Blackford agreed in principle on Thursday that an election should not take place until Mr Johnson had sought the extension to the Article 50 exit process at an EU summit on October 17-18th.

But opposition MPs have been deeply divided over tactics beyond that point.

Mr Corbyn’s team and some SNP figures had considered calling a vote of no confidence on Monday to trigger an election in late October, with Brussels having agreed to delay Brexit.

Other Labour MPs and the smaller parties have argued that there should be no attempt to force an election until after November 1st to ensure that a no-deal Brexit is impossible.

Opposition MPs emerged from Friday morning’s conference call with a broad understanding that they will now hold off from a vote of confidence next week.

Liz Saville Roberts, leader of Plaid Cymru in Westminster, said an election before November 1st now seemed unlikely given no opposition party would put down a no-confidence motion on Monday.

However, one person involved in the talks said that Labour and the SNP were still “keeping people guessing” ahead of next week.

Mr Johnson said on Thursday he would rather be “dead in a ditch” than delay any further by being forced to go on bended knee to Brussels to seek an extension.

“I’ll go to Brussels, I’ll get a deal and we’ll make sure we come out on October 31st – that’s what we’ve got to do,” Mr Johnson told Sky News during a visit to Scotland on Friday. When asked if he would resign if he could not deliver that, he said: “That is not a hypothesis I’m willing to contemplate.”

After a torrid week of multiple defeats in the House of Commons, his purge of 21 moderate Tory MPs and the resignation of his brother Jo Johnson, the prime minister will stay in Scotland overnight on a campaigning visit.

Mr Johnson’s trip will include a meeting with the queen at her Balmoral estate. He will also use his visit to announce an additional £51.4 million for Scottish farmers over the next two years.

Meanwhile the chief constable of the force whose student officers were used as the backdrop for the prime minister’s campaigning speech in Wakefield on Thursday said he was “disappointed” they were used in a section of the visit not related to police recruitment.

“The good news of extra officers was overshadowed by the media coverage of other events,” said John Robins, chief constable of West Yorkshire. “It was the understanding of West Yorkshire Police that any involvement of our officers was solely about police officer recruitment. We had no prior knowledge that the speech would be broadened to other issues until it was delivered.” – Copyright The Financial Times Limited 2019