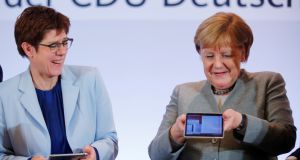 The centre-right Christian Democratic Union (CDU) has headed Germany’s federal government since 2005 but all is not well – even the dogs in the street know that.

They’re barking outside the Bundestag in Berlin; on the ring road around Leipzig, hosting Friday’s CDU party conference; and in the country lanes of Vechta-Cloppenburg, a Lower Saxony constituency where the CDU polled a record 58 per cent in the 2017 federal election.

“That was the best result in the country for the CDU or of any other political party, but even we’re down 10 points on the last time,” says Bernhard Hackstedt, district party chairman.

Everything is working fine with the party at local political level in his conservative farming district, says Hackstedt, but most agree the CDU-led grand coalition in Berlin – the third since 2005 – is in serious trouble.

One year after chancellor Angela Merkel pulled off a political coup, handing the party reigns to her chosen successor, the CDU is gripped by a completely atypical, internecine feud.

Just 12 months ago Annegret Kramp-Karrenbauer held a fiery party conference speech and, after a nail-biting vote, trumped two rivals for the CDU chair. But as husky-voiced German singer Hildegard Knef once crooned, it was all downhill from there.

The woman known to all as AKK returns to the party conference after a humiliating first year of verbal missteps and strategic slips. Her party – after a series of state election disasters – is polling up to six points behind its weak 2017 federal election result.

And, after 14 years coasting along in the slipstream of the popular Merkel, the CDU is struggling under her successor to renew itself on the crucial political issues of the day: climate, welfare and security.

Despite witnessing a considerable legislative work rate in recent months in Berlin, some 53 per cent of Germans are fatigued with what they perceive as a quarrelsome grand coalition of the CDU and Social Democrats (SPD).

The SPD has spent the second half of this year soul-searching searching for a new leader. And AKK resembles Scrooge in A Christmas Carol: haunted by CDU ghosts past, present and future.

Angela Merkel is the ghost of the past. Determined to serve a full term to 2021 rather than hand over the chancellery keys, her mere presence casts a shadow over her CDU successor’s efforts to establish her political authority.

AKK’s ghost of the present is Friedrich Merz, a Merkel rival welcomed back into the fold last year by CDU liberals like a prodigal son. He lost the leadership race but has so far refused to either disappear again or join the party front bench.

Instead Merz, with ill-disguised chancellorship ambitions, is loitering with intent. Ominously for AKK loyalists, he plans to address Leipzig delegates.

While the leader doesn’t face re-election until next year, Kramp-Karrenbauer knows that failing to bring Merz to earth could be dangerous – and could even see both outflanked by the ghost of the CDU future: the ambitious 39-year-old health minister Jens Spahn, who finished third in last year’s leadership race.

Kramp-Karrenbauer’s challenge in Leipzig is to assert her authority, embrace or face down Merz and his conservative backers, and present ideas to stabilise the wobbly German economy.

While Brexit is not daily news in Germany, many CDU delegates are worried about how they will explain Germany’s EU-27 budget contribution doubling to €33 billion.

Finally, wearing her second hat as defence minister, AKK will have to provide a clear response to Emmanuel Macron’s “brain death” Nato diagnosis.

In the CDU heartland of Cloppenburg-Vechta, ordinary members talk of Zukunftsangst, a hard-to-define fear for the future.

“From outside, people just see party in-fighting rather than working,” says Dirk Ordmann, a 23-year-old local CDU member since 2015. “In Berlin things are stuck somehow and it’s hard to know exactly what the problem is.”