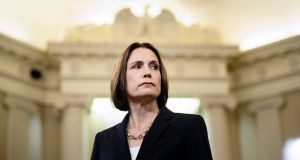 A former adviser to US president Donald Trump has warned members of Congress not to propagate a debunked conspiracy theory that Ukraine interfered in the 2016 election.

Fiona Hill, testifying on the fifth full day of the public hearings in the ongoing impeachment inquiry into Mr Trump’s policy on Ukraine, said it was “beyond dispute” that Russia “systematically attacked our democratic institutions in 2016”.

“Based on questions and statements I have heard, some of you on this committee appear to believe that Russia and its security services did not conduct a campaign against our country and that perhaps, somehow, for some reason, Ukraine did,” Ms Hill said in her opening statement before the House intelligence committee on Thursday.

“This is a fictional narrative that has been perpetrated and propagated by the Russian security services themselves,” she said.

Mr Trump is accused by Democrats of pressuring the president of Ukraine, Volodymyr Zelenskiy, to announce investigations into the alleged Ukrainian interference as well as the business activities in Ukraine of Hunter Biden, a son of former vice-president Joe Biden, a potential rival to Mr Trump in next year’s election.

The US president raised the matters with Mr Zelenskiy in a phone call on July 25th. Democrats say the president withheld nearly $400 million of military aid as part of his effort to secure a public statement about the investigations from Mr Zelenskiy. Mr Trump has denied any wrongdoing.

In her testimony, Ms Hill said the “unfortunate truth” was that Russia was the foreign power that had interfered in the 2016 election. “This is the public conclusion of our intelligence agencies, confirmed in bipartisan Congressional reports. It is beyond dispute, even if some of the underlying details must remain classified,” she said.

I have been watching people making phone calls my entire life. My hearing is, and has been, great. Never have I been watching a person making a call, which was not on speakerphone, and been able to hear or understand a conversation. I’ve even tried, but to no avail. Try it live!

Ms Hill’s warning about Russia threw down the gauntlet to Republican members of the committee who have urged the impeachment inquiry to investigate alleged interference by Ukraine in the 2016 election.

On Wednesday, the top Republican on the committee, Devin Nunes, said that Democrats “got campaign dirt from Ukrainians in the 2016 election” and “were heavily involved, working with Ukrainians, to dirty up the Trump campaign”, though on Thursday he nuanced his argument to suggest that both Ukraine and Russia could have interfered in the election.

British-born Ms Hill is a Russian expert who left a position at the Brookings Institution in Washington to join the Trump administration, where she worked closely with former national security adviser John Bolton. She departed the White House in July.

Under questioning on Thursday, she said Mr Trump’s personal lawyer, Rudy Giuliani, the US ambassador to the EU, Gordon Sondland, and others had been conducting an alternative foreign policy in relation to Ukraine. She described how she realised that Mr Sondland was “ involved in a domestic political errand, and we were being involved in national security, foreign policy, and those two things had just diverged”.

She was questioned about a July 10th meeting attended by Mr Bolton, Mr Sondland and others, during which Mr Sondland allegedly told Ukrainian officials that they should open investigations into former vice president Joe Biden in exchange for an oval office meeting.

She told the committee on Thursday that she saw Mr Bolton “stiffen” after the comments. He then told her to report her concerns to the National Security Council lawyers and to state that she was “not part of whatever drug deal Sondland and [acting White House chief of staff Mick] Mulvaney are cooking up”.

Also on Thursday, David Holmes, a US official who overheard a phone conversation between Mr Trump and Mr Sondland in a restaurant in Kiev the day after Mr Trump’s July 25th phone call with Mr Zelenskiy, testified before the committee.

He said Mr Trump asked during the call about the investigation, and Mr Sondland replied that Mr Zelenskiy was “gonna do it”, adding that he would do “anything you ask him to.”

Shortly before Mr Holmes testified, Mr Trump tweeted that he had been “watching people making phone calls my entire life” and that his hearing “is, and has been great”.

“Never have I been watching a person making a call, which was not on speakerphone, and been able to hear or understand a conversation,” he wrote. “I’ve even tried, but to no avail. Try it live!”

Thursday’s testimony by Ms Hill and Mr Holmes may be the last public hearings held by the House intelligence committee as it continues its impeachment investigation into Mr Trump. Congress is scheduled to break for Thanksgiving on Friday, and is not due to reconvene until December.