A meal for The Dead: James Joyce’s enthusiastic fans in Oslo 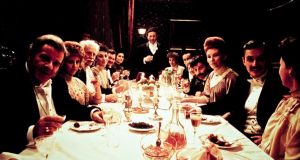 A scene from the film adaption of The Dead by James Joyce. The Dead has been described as ‘the ultimate Christmas story for grown-ups haunted by the past’.

There can be few better places outside Ireland to celebrate James Joyce’s masterly short story The Dead than the country of Henrik Ibsen, the Norwegian playwright who had such an influence on the young Joyce that he learned Norwegian (Dano-Norwegian at the time) to read his work in the original.

Joyce has many fans in Oslo. The city’s Bloomsday Society marks the day with gusto every June. In 2017, the Norwegian publisher Skald issued a standalone edition of The Dead – which Joyce originally published as the final story in Dubliners – translated into Norwegian by Jon Fosse.

It was this handsome slim volume – its striking fabric cover featuring a snowflake motif against a chartreuse green background – that centred our homage to The Dead at Oslo’s Litteraturhuset (House of Literature) on January 6th.

The genesis for the evening came from a conversation I had with Andreas Liebe Delsett, artistic director at Litteraturhuset, last year about a private re-enactment of the Epiphany dinner underpinning The Dead which I had organised in my adopted hometown of Marseille. He suggested we do a public tribute to one of literature’s most famous meals in Oslo.

Last month tickets for the event billed a “Joyce-inspired New Year’s party with both spiritual and solid sustenance” and supported by the Irish embassy were selling fast. By early January they had sold out.

The 80 guests – several of whom turned up in period dress – were treated to a five-course interpretation of the meal Joyce details in The Dead by Tore Namstad, head chef at Litteraturhuset’s Kafe Oslo. Joyce’s “fat brown goose” was served with a savoury bread pudding studded with nuts and dried fruits.

A cold roast beef salad substituted for “the round of spiced beef”. Red and yellow jellies accompanied little mounds of blancmange. The only addition to the original menu was a plate of oysters to start because, as Namstad, explained, he is so fond of Irish oysters.

As actor Petter Winther read from Jon Fosse’s translation of The Dead – Dei Døde in Norwegian – a montage of drawings by Robert Berry from the 2014 illustrated edition of the story published by Stoney Road Press and the James Joyce Centre in Dublin flashed on the wall behind him.

Snow was not general in Oslo that night but as the guests drifted out into the chilly air, the sound of Joyce’s words rendered into Norwegian was ringing in their ears

Prof Tore Rem from the University of Oslo donned the straw boater he brought back as a souvenir from his visit to Dublin last June where he delivered a Bloomsday lecture at the National Library on the influence of Ibsen on Joyce. In between Winther’s spirited readings, Rem reprised much of his Dublin talk to the delight of the predominantly Norwegian crowd.

Another guest, Libyan poet Khaled Mattawa, read his poem Before, which echoes the snowfall imagery in Joyce’s story. Mattawa, whose recent collection Mare Nostrum was inspired by the migration question, was intrigued to learn that one of the Irish naval vessels that participated in the EU’s Operation Sophia in the Mediterranean was named after Joyce.

We discussed the difficult relationship between Joyce and Ireland and how both The Dead – which the Economist described last month as “the ultimate Christmas story for grown-ups haunted by the past” – and its author have made headlines there this year.

Joyce has been in the news because of the proposal by two Dublin city councillors to repatriate his remains from Zurich where he died in 1941, and The Dead because of controversial plans to turn the “dark gaunt house” on the Liffey quays that inspired the story’s setting into a tourist hostel.

A mention of The Irish Times’s “leave him be” editorial on the question of Joyce’s remains returning to Ireland raised a chuckle from the audience.

Petter Winther performed a haunting rendition of The Lass of Aughrim before reading the memorable passages that bring The Dead to a close. Snow was not general in Oslo that night but as the guests drifted out into the chilly air, the sound of Joyce’s words rendered into Norwegian was ringing in their ears.