Couple will ‘spend time in Canada and the UK’, notes statement after royal summit 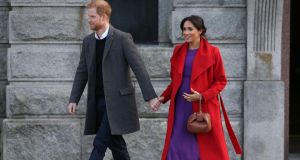 Queen Elizabeth has agreed that her grandson Harry and his wife Meghan, the Duke and Duchess of Sussex, should divide their time between Britain and Canada during a “period of transition” as they find a new role. The queen issued a statement about the couple’s future after a meeting at Sandringham Palace with Prince Charles, Prince William and Prince Harry.

“Today my family had very constructive discussions on the future of my grandson and his family. My family and I are entirely supportive of Harry and Meghan’s desire to create a new life as a young family. Although we would have preferred them to remain full-time working members of the royal family, we respect and understand their wish to live a more independent life as a family while remaining a valued part of my family,” she said.

“Harry and Meghan have made clear that they do not want to be reliant on public funds in their new lives. It has therefore been agreed that there will be a period of transition in which the Sussexes will spend time in Canada and the UK. These are complex matters for my family to resolve, and there is some more work to be done, but I have asked for final decisions to be reached in the coming days.”

The duke and duchess surprised other members of the royal family last week by announcing their intention to step back from their roles as senior royals. They said they wanted to be free to make business deals and to control media access to them but to keep their house in the grounds of Windsor Castle and to “collaborate” with the queen.

The Sussexes spent six weeks on Vancouver Island including Christmas and the New Year holidays and the duchess returned there last week to rejoin their son Archie.

Earlier on Monday, Prince William and Prince Harry issued a joint statement dismissing what they called a “false story” about their relationship. The Times on Monday cited a source close to the Sussexes claiming that the couple have felt “bullied” by Prince William. The princes did not deny that their relationship has become difficult but condemned the words used in the report.

“Despite clear denials, a false story ran in a UK newspaper today speculating about the relationship between the Duke of Sussex and the Duke of Cambridge. For brothers who care so deeply about the issues surrounding mental health, the use of inflammatory language in this way is offensive and potentially harmful,” the statement said.

Prince Harry has alleged that some of the negative media reporting and commentary on his wife has been motivated by racism. But home secretary Priti Patel, who is of Indian origin, on Monday rejected that analysis.

“I’m not in that category at all where I believe there’s racism at all. I think we live in a great country, a great society, full of opportunity, where people of any background can get on in life,” she said.

1 ‘I thought it was a hoax’: Patient dies after Texas Covid party
2 Maureen Dowd: Biden has his limitations but he’s no Trump
3 Immunity to Covid-19 could be lost in months, study suggests
4 Quarantine process to be tightened as health officials grow nervous
5 Dirty money: How the Mafia plundered Italy’s public health system
Real news has value SUBSCRIBE