Five make it through to next round of Labour leadership contest 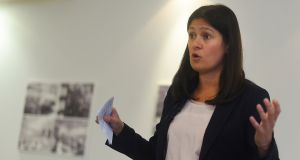 Lisa Nandy delivering a speech in Dagenham on Monday. She appealed to Labour Party members to make a “brave” choice by choosing her as leader. Photograph: Peter Summers/Getty Images

Five candidates have won enough support from Labour MPs to enter the second round in a three-stage contest to succeed Jeremy Corbyn as party leader.

They now need the backing either of two trade unions and one other Labour affiliate (accounting for 5 per cent of the membership of all affiliates) or of 32 constituency Labour parties to get on the final ballot for about half a million members and registered supporters.

Sir Keir, the frontrunner in polls of the membership, won 89 nominations, more than twice the number who backed his closest rival, Rebecca Long Bailey.

“This has been a good-natured and respectful start to the debate about the future of the Labour Party. Lots of important issues have been raised by all the candidates in the race so far,” he said.

“Over the coming weeks, I’m looking forward to travelling across the country to listen to members and activists about how together we can restore people’s trust in Labour as a force for good.”

Ms Nandy, who has criticised Labour’s failure to connect with Leave voters ahead of last month’s general election, launched her campaign on Monday with an appeal to members to make a “brave” choice by choosing her.

“These have been a bruising few years and a shattering defeat. But now is not the time to steady the ship or play it safe. If we do not change course we will die and we will deserve to. This is the moment when we up our game and recover our ambition. So I am asking you to make the brave, not the easy choice, in this leadership contest,” she said.

All five candidates for Labour’s deputy leadership won enough support from MPs to move on to the next stage. Shadow education secretary Angela Rayner is the runaway favourite and she will face Ian Murray, Dawn Butler, Rosena Allin-Khan and Richard Burgon in the next round of the contest.

In the House of Lords, peers debated the Withdrawal Agreement Bill, which passed all its stages in the Commons last week. Labour’s Diane Hayter criticised the government’s decision to “ram” the Bill through parliament and to make clear that it would not consider any changes from the Lords.

“This is both stupid, as corrections will have to be made later, and arrogant, with scant regard to our normal, democratic method of law-making,” she said.

Gavin Barwell, who was Theresa May’s chief of staff during much of the Brexit negotiations, said Boris Johnson’s Brexit deal was in large part the same as hers but he regretted the changes to the Northern Ireland protocol.

“The government have gone back to what the EU originally wanted: a Northern Ireland-only arrangement. The result is that goods will have to undergo customs checks when they are moved from Great Britain to Northern Ireland, creating a border within our single market,” he said.