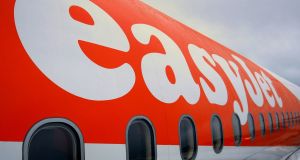 Luton-based carrier EasyJet plans to park ‘the majority of its fleet’ from Tuesday. Photograph: PA

EasyJet has apologised to staff after it emerged that a motivational video addressing pilots and cabin crew being asked to make huge financial sacrifices due to the coronavirus crisis heavily plagiarised a speech on coronavirus by Taoiseach Leo Varadkar.

An unknown video editor spliced together footage of Mr Varadkar’s address with a rallying cry by EasyJet’s chief operating officer Peter Bellew, a former Ryanair manager who has been negotiating with cabin crew.

The speeches are identical in places, prompting dismay and ridicule among EasyJet staff, who are being asked to accept an extended period of unpaid leave, pay freezes and diminished employment conditions to help the airline survive the pandemic.

“Pilots at easyJet were already appalled at Peter’s conduct this week, I think this clearly plagiarised speech cements his reputation as being completely untrustworthy,” said one pilot, who asked not to be named due to the sensitivity of negotiations with the company.

In an apology to staff on Saturday, Mr Bellew wrote: “Some of you have spotted similarities between the message I did last week and a recent speech by the Irish taoiseach, Leo Varadkar. I can only hold my hands up and apologise. I thought the Taoiseach struck exactly the right note and it really resonated in my mind with what we are going through, so I borrowed some of his phrases in my recent message to cabin crew and pilots, which I realise now I should not have done.

“I would like to say sorry to the Taoiseach and to all of you. I will write all of my own speeches in future.”

The embarrassing video emerged as EasyJet and the wider aviation industry face a fight for survival, with global air travel at a virtual standstill due to the coronavirus outbreak.

The Luton-based airline said on Friday that majority of its fleet would be grounded from Monday, with just 10 per cent of its flying capacity still operating. The company has asked cabin crew and pilots to accept swingeing cuts to help navigate the crisis, including three months of unpaid leave.

Pilots and crew were said to be sympathetic to the request considering the devastating financial effect of the pandemic on airlines but were enraged by other proposals, seen as a longer-term assault on employment rights. These include meals provided to crew, promotion-based pay rises and fatigue prevention measures for pilots.

Pilots union Balpa, and Unite, representing cabin crew, are understood to have rejected EasyJet’s plan and issued a counterproposal. Staff have pointed out that the airline could receive financial support from the government and complained that rival airlines have offered better terms to their staff.

Despite the planned cuts affecting staff, the airline is set to go ahead with a £174 million (€188m) dividend payout to its investors, including £60 million for founder and major shareholder Sir Stelios Haji-Ioannou. - Guardian